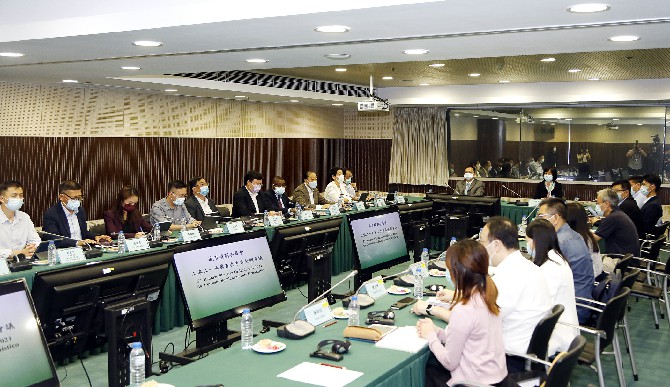 A member of the Urban Planning Committee (CPU) raised concerns over the ownership and responsibility for the inter-building flyovers used to provide access to pedestrians.
The question was raised by CPU member Lo Chi Kin during the discussion of the urban conditions plan (PCU) of a building located at a land plot next to the Avenida Marginal do Patane yesterday.
Lo noted that the building has two pedestrian flyovers that link it to two other buildings located immediately next to it over the streets and to different road sidewalks, taking the opportunity to raise the issue of clarifying who owns such structures.
“Technically the flyover is part of the building and it is connected to its façade but in case it needs to be repaired or maintained, who will take responsibility for this? Is it the government or the building owners?” Lo, who is a vice president of the Board of Directors of the Municipal Affairs Bureau (IAM), questioned, adding that the matter will become relevant if, in the future, problems arise from such structures. In such an event, there should be a clear definition of who is responsible for the inter-building flyovers to avoid legal disputes.
Addressing the issue, director of the Land, Public Works and Transport Bureau (DSSOPT), Chan Po Ha, who also assumes the presidency of the committee, added that in normal circumstances these flyovers become part of the public space upon being built, and so they are the responsibility of the IAM for management.
“We will stipulate that in the [land concession] contract between the government and the building owners,” Chan said.
Committee member Choi Wan Sun agreed with Lo on the need to clarify the issue of ownership, since there are several buildings where this type of structure exists. Additionally, “In the future, this might happen in many more and different places,” she said, noting Zone A of the new landfills.
The debate was brought to an end by the vice president of the committee, Iau Teng Pio, who said, “We should not discuss this matter here today. We [the committee] do not have the competencies to address this matter,” Iau said, despite noting that Lo was correct regarding the government’s need to take this matter into account.
In a further explanation, a staff member of the DSSOPT acknowledged that there are many situations still to be discussed regarding the building and land plot but, “on this committee, we are only issuing the PCU. Basically this means we are deciding on the basic guidelines for the urban planning of the land plot,” adding that such discussion should occur at a later stage and in a different committee.
Land plot with
special restrictions
The PCU of a very small land plot, located at Calçada do Botelho, across Saint Anthony’s Church was once more under discussion at the CPU meeting.
A significant area of the small piece of land is to be designated for public use to enlarge the street and sidewalk. The conditions for the remainder of the plot are now being settled.
Due to the location, the Cultural Affairs Bureau (IC) has noted a series of conditions that will apply to the remaining area. Such conditions include the non-usage of glass as the main façade material as well as mirrored windows. Even the color of the building is subject to a restriction and cannot surpass 80% on the scale of saturation and brightness.
On the topic, the committee member and architect André Lui questioned the need for such strictness over the color of the building.
IC’s vice president Deland Leong explained that “Requirements are stricter in that area due to the land plot being located within the protection zone [of the historical center] as well as the surroundings including the [Saint Anthony’s] Church. For this reason, reflective glass and very vibrant colors should not be used.”