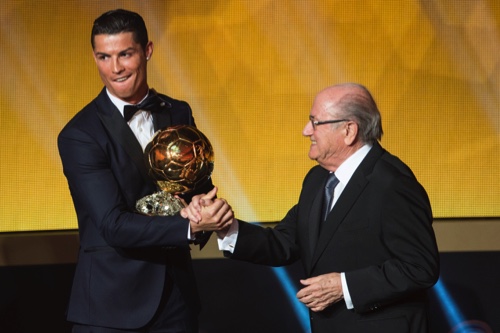 Cristiano Ronaldo, left, of Portugal is being congratulated by FIFA President Joseph Blatter

For the third time, Cristiano Ronaldo was voted the world’s best football player. He hopes it also brought him closer to being remembered as one of the greatest of all time.
Ronaldo won the FIFA Ballon d’Or in a rout yesterday (Macau time), racking up more than twice the votes of Lionel Messi, who edged German goalkeeper Manuel Neuer into third.
The Real Madrid and Portugal forward’s latest hat trick tied him with Zinedine Zidane and Ronaldo of Brazil on three FIFA awards. The original Ballon d’Or presented by France Football magazine was won by European standouts Johan Cruyff, Michel Platini and Marco van Basten three times each.
Only Messi’s four FIFA awards is ahead of the 29-year-old Ronaldo, whose Madrid team again seems better placed for trophies in 2015 than his rival’s Barcelona.
“I want to become one of the greatest players of all time,” Ronaldo said through a translator in his acceptance speech. “Of course, this requires a lot of effort and I hope to get there.”
Ronaldo retained football’s highest individual honor after scoring 61 goals last year. His record tally of 17 in a Champions League season helped Madrid win an unprecedented 10th European Cup title — and overshadowed a relatively disappointing World Cup campaign.
He has kept up the pace since FIFA’s voting college — national team captains and coaches, plus selected journalists, in more than 180 countries took part — cast ballots in November.
Ronaldo helped Madrid take the Club World Cup title last month to cap a Spanish-record 22-match winning streak.
“It’s a fantastic moment in my career,” Ronaldo said after the FIFA ceremony. “I want to carry on with more titles in my career, collective and individual.”
He won his first FIFA award in 2008 as a Manchester United player and on Monday cited his mentor there, Alex Ferguson, as an inspiration.
“He would say, ‘Cristiano, you are the best, don’t worry about the rest.’ He’s fantastic. I miss him,” Ronaldo said.
One year ago, Ronaldo was in tears of joy and relief at ending Messi’s four-year hold on football’s highest individual honor.
He was a much more composed winner on Monday.
On hearing his name read by French great Thierry Henry, Ronaldo closed his eyes, dipped his head and smiled before walking to the stage.
“It has been an unforgettable year,” Ronaldo, who now has a statute in his home island Madeira, said after taking a deep breath.
In what has become a Ballon d’Or tradition, Portugal captain Ronaldo did not pick Messi in his top three and Argentina captain Messi ignored Ronaldo on his ballot. Neither selected Neuer.
Ronaldo received 37.66 percent of total voting points in a 23-candidate ballot. Messi got 15.76 percent and Neuer 15.72 percent.
Germany won the other three major individual awards to compensate for Neuer’s defeat.
World Cup-winning coach Joachim Loew beat Ancelotti and Diego Simeone of Spanish champion Atletico Madrid for the men’s coaching awarrd.
Germany midfielder Nadine Kessler beat two former winners — Marta of Brazil and United States forward Abby Wambach — to be named the best women’s player in 2014. Kessler received 17.52 percent of all voting points, Marta got 14.16 percent and Wambach 13.33 percent.
A German man also won the coaching award for women’s football: Ralf Kellermann was rewarded for leading a Wolfsburg team including Kessler to back-to-back UEFA Champions League titles. The shortlist included Japan coach Norio Sasaki and Maren Meinert, who guided Germany to win the Women’s Under-20 World Cup.
James Rodriguez’s volley for Colombia against Uruguay at the World Cup beat Ireland forward Stephanie Roche’s spectacular strike for Peamount United in an amateur domestic league match in October 2013. In third place was Netherlands forward Robin van Persie’s header against Spain. Graham Dunbar, Sports Writer, Zurich AP