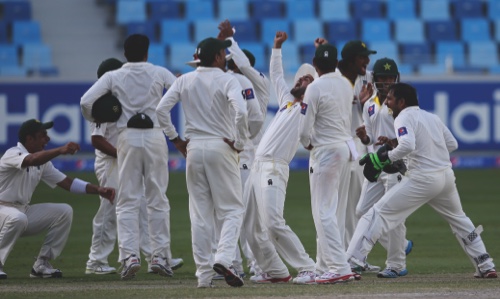 Pakistan left-arm spinner Zulfiqar Babar claimed two early wickets as New Zealand staggered to 81-3 chasing at lunch on the third day of the first test yesterday in Abu Dhabi.
Babar (2-37), who took 14 wickets in Pakistan’s 2-0 test-series victory against Australia, had captain Brendon McCullum (18) and Ross Taylor (0) caught close to the wicket after New Zealand resumed on the overnight score of 15-0.
Pakistan amassed 566-3 before declaring its first innings late on the second day and New Zealand still trails by 485 runs.
Tom Latham escaped two close catches and was batting on 42 while Corey Anderson was not out on 13 at the break.
Paceman Rahat Ali was rewarded for a brilliant spell of five maiden overs when Kane Williamson (3) rolled a yorker back onto his stumps.
New Zealand, playing a test match for the first time on the slow United Arab Emirates wickets, struggled equally against spin and fast bowling as Pakistan allowed only 66 runs in the first session.
McCullum survived two strong lbw appeals against fast bowler Imran Khan before Younis Khan took a fine, low catch when the New Zealand skipper pushed hard at Babar’s sharp turning delivery.
In the next over, Williamson managed to dig out Ali’s delivery only to see the ball hitting the back of the bat and rolling back onto the stumps.
New Zealand’s most experienced batsman, Ross Taylor, recovering from a right calf injury, never looked at ease against Babar before offering a tame catch to Asad Shafiq at close-in gully as New Zealand slipped to 47-3.
Pakistan missed two tough chances in an otherwise dominating first session.
Azhar Ali couldn’t take a reflex catch at forward short-leg before Tom Latham had added a run to his overnight 5. Then when Latham was on 32, Sarfraz Ahmed missed a thick edge off Mohammad Hafeez’s offspin. AP