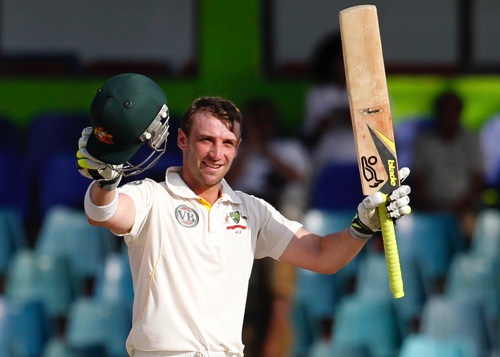 Opener David Warner, calling it the best innings of his career, scored his 10th test century in an emotional tribute to former teammate Phillip Hughes as Australia ended the first day of the first test against India on 354-6 yesterday.
The bad news for the home side was yet another injury to captain Michael Clarke, who left the field while on 60. He’s had injections for lower back pain and his status for the rest of the test will be reassessed on Wednesday morning.
Warner, who was on the field two weeks ago when Hughes suffered fatal injuries after being hit with a short-pitched delivery, jumped into the air and looked to the sky when he took a single for his 100 at Adelaide Oval.
He then hugged batting partner Clarke, who won the toss and elected to bat.
Warner, out in the final session for 145, dedicated his century to Hughes.
“I knew the little man up there was with me at the other end and it all fell into place,” Warner said.
“I like to do a little bit of a celebration but that was definitely for him today. He was there when I scored my first hundred. He was at the other end and I dedicated that hundred to him today.”
India picked up three wickets in the final session, including wicketkeeper Brad Haddin for a duck in the final over of the day, ending play. Steven Smith was 72 not out at stumps.
Warner’s runs came off 163 balls, including 19 fours. Five of those boundaries came from the first 10 balls he faced and he later added another four with a reverse sweep shot.
The match began with a tribute to Hughes, who died Nov. 27 from injuries sustained from being hit by a bouncer in a domestic match at the Sydney Cricket Ground.
India’s two first-session wickets were opener Chris Rogers, out for 9, and Shane Watson (14), both from loose shots that were caught at second slip by Shikhar Dhawan off Ishant Sharma and Varun Aaron respectively.
Mitch Marsh followed Warner out in the final session after the second new ball was taken, out for 41 after being caught by stand-in captain Virat Kohli off Aaron’s bowling, his second wicket of the day.
Nightwatchman Nathan Lyon was bowled for three runs by Mohammed Shami with three overs left in the day, and with Clarke’s return unlikely, the hosts were down a potential seven wickets heading into day two.
Shami (2-83) and Aaron (2-95) took two wickets each to lead the Indian bowlers.
Legspinner Karn Sharma, making his test debut, took Warner’s wicket and finished his first day with figures of 1-89.
“It was very good we came back in the last session,” Karn Sharma said. “We’ve just got to get some crucial wickets in the morning.”
Warner faced the first bouncer of the match off the first ball of the fourth over, a 145-kph delivery from Aaron, India’s quickest bowler. Warner ducked away from the delivery without problem.
When Warner reached 63 — the same score Hughes was on when he was fatally injured, Warner looked up to the sky for the first time for the day and the crowd warmly applauded. When Smith later reached 63 late in the day, the crowd again gave a prolonged ovation.
Kohli, replacing regular injured India captain M.S. Dhoni, said he would have batted if he won the toss.
The Adelaide match was supposed to start three days later on Friday, but was moved up after the first scheduled test at Brisbane was postponed and shifted due to Hughes’ death. The Brisbane match, now the second in the series, will begin on Dec. 17.
Yesterday, an unusual first day for the start of a test match, there were 25,619 spectators at the 50,000-seat Adelaide Oval. AP