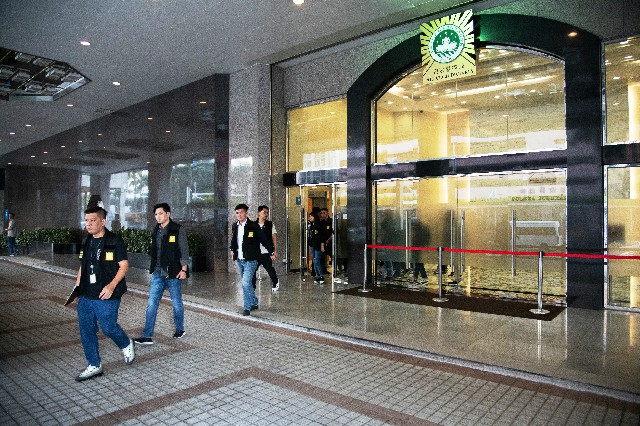 A 37-year-old male suspect surnamed Kam has been caught by the Judiciary Police for the theft of HKD2 million from his employer.
The case took place on July 31. The local suspect worked as a part time at a teashop in the NAPE district which was owned by his employer.
That morning, Kam was instructed by his female employer to go to a VIP casino located on the Macau Peninsula to withdraw HKD2 million from the account of a friend of the employer.
The owner told the police that she trusted Kam as he has worked for a relatively long period at her shop.
The fund should have been deposited into the bank account of the teahouse owner, but Kam did not do so.
Instead, exactly half an hour after withdrawing the money, he went out of contact and took the cash across the border to the mainland.
Activating the Mainland-Macau cooperative mechanism, the Macau police was notified earlier this year by the mainland law-enforcement that the suspect had been intercepted. On November 15, the suspect was handed over to the Judiciary Police.
In his statement, the suspect confessed that he had taken the funds back to the mainland to repay his own debts and for other purposes.
The Judiciary Police has charged him with abuse of trust for a relatively large amount.
In another case, the Public Security Police Force arrested a 30-year-old man from Taiwan, surnamed Lin, at the Macau International Airport for the possession of forbidden arms.
At 5:40pm on November 17, the police received a report from the airport security service. A piece of forbidden arms was suspected to be in the hand baggage of Lin, who was passing through a pre-immigration security check. The device was believed to be a stun gun.
After on-site investigation, the police confirmed that the device was a forbidden weapon.
The man declared that he had bought the device online to use as a lighting and safeguarding device and was in his bag during his trip in Macau.
He was charged by the police with the crime of Possession of Forbidden Arms and Explosive Matters.
Finally, a woman’s casino chips were taken and lost – twice – in her presence without coercion at a Cotai VIP casino table.
At 3:40am, November 14, a 47-year-old female gambler, surnamed Wang, who was sitting next to her, asked for her permission to borrow her chips.
Before she could react, Wang took HKD200,000 worth of chips and lost betting on the player. In the next game, Wang got the same result, expect at a higher cost: HKD300,000.
Wang claimed that she would pay the victim back when she returned to her hotel room, but it turned out to be a lie.
As Wang could not pay her back the money, the victim approached the Judiciary Police and asked for an investigation. The suspect, meanwhile, was caught red-handed at the hotel. The case was categorized as scam.