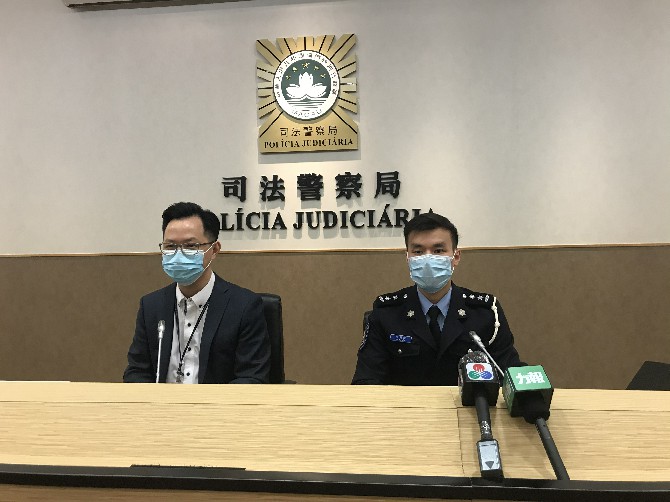 A Macau resident tried to break into the Coloane Prison, the Public Security Police Force (PSP) said during yesterday’s joint police press conference.
The incident took place on the night of February 18 at approximately 9 p.m. The man, a taxi driver in his 30s, drove his taxi to the prison gate where he kept honking the car’s horn. His girlfriend was also inside the vehicle during the entire episode.
The prison policemen questioned him about his behaviour to which the man replied that he wanted to enter the prison.
While honking the vehicle’s horn, he also shouted nonsense. The prison police officers refused the man’s demands to enter the prison. Later, he stopped the vehicle in front of the prison gate, left the car and attempted to enter the prison on foot.
Defying police orders, the man continued to attempt entry. Four prison policemen together stopped the man and transferred him to the PSP.
According to the PSP, the incident occurred outside the prison’s normal visiting hours. Moreover, the man was not scheduled to visit any of the inmates.
During the incident, the man’s girlfriend had remained inside the taxi. Upon police questioning her, the woman claimed she had been asleep the entire time and had only woken up when the man was already arguing with the prison officers.
After investigations, the PSP found that the man had been involved in another offense, which had taken place a few minutes prior to his attempted prison trespass.
At approximately 9 p.m., the man had stopped his vehicle at Avenida de Lok Koi, where he caused damage to the back window of a taxi that was parked there. The owner of the taxi is not an acquaintance of the man, nor, he said, did he have disputes with anyone.
Later, the PSP found an iron rod inside the suspect’s taxi. The PSP believes that the man used the iron rod to break the window of the other taxi. According to the PSP, the iron rod constitutes a banned weapon.
During police questioning, the man continued speaking senselessly. After questioning the suspect, the PSP sent him to the hospital for a drug test, a blood-alcohol test and psychiatric tests. The results of all three tests were negative, indicating that the man was healthy and not under the influence of illicit drugs or alcohol.
The police learned from the man’s girlfriend that he had not been able to sleep for more than ten days due to financial worries and the man had been speaking incoherently very recently.
The PSP further stated they are unaware of any relationship the man may have with any of the prison inmates.
The PSP has accused the man of possession of illegal weapons, of trespass on prison property and of causing damage.

Suspected pimp caught
after illegal entry
The Judiciary Police (PJ) has found an illegal immigrant responsible for a prostitution case dating back to 2017, the PJ said during yesterday’s press conference. The 32-year-old man is an unemployed mainland resident surnamed Tan.
Tan was responsible for involvement in organized prostitution which was recorded in March 2017. Both Tan and his wife were implicated in the case.
Back then, Tan rented an apartment in Taipa and then sub-let the property to a group of sex workers. Tan was paying another individual 6,000 patacas per month to guard the residential unit. Besides securing the place, the guard delivered meals three times a day to the sex workers.
Tan’s wife was responsible for collecting daily rent from the sex workers. She charged them 200 patacas per day per person to live in the apartment.
Earlier this week, the customs authority found Tan together with another illegal immigrant, who was attempting to assist Tan to enter Macau illegally.
Upon being questioned by PJ officers, Tan denied the accusation of an organized prostitution crime and refused to cooperate with the police. However, the police have claimed that the bureau’s investigation has revealed that, in Tan’s case, there was a guard who delivered the women meals regularly and his wife was charging rent. The PJ considered these circumstances to be clear evidence of organized activities.

Man charged with
dangerous driving
A 45-year-old Macau man has been charged with dangerous driving, according to the PSP.
Earlier this month, the PSP spotted two different videos on social media showing a man swerving along a street near Ilha Verde.
Later, the PSP found the owner of the vehicle, who said he was not the driver in the videos and that his vehicle was kept at his younger brother’s car maintenance shop.
The PSP learned that the 45-year-old man, who is the younger brother of the owner had been the driver on these occasions. The younger brother admitted to dangerous driving and the PSP turned him over to the prosecution authority yesterday.