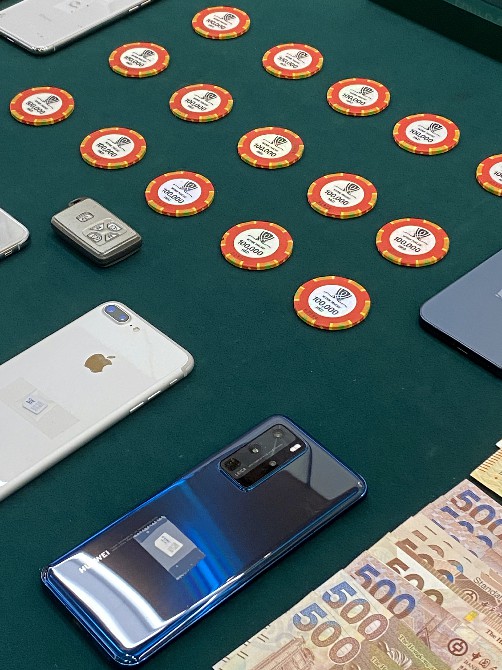 Four local men were arrested by the Judiciary Police (PJ) and are suspected of being involved in a scam that involves HKD1.5 million in counterfeit casino chips, a PJ spokesperson said yesterday during a special press conference organized by the police force.
The arrests occurred on Tuesday, January 12, after an operation prompt by a call from a staff member at a casino in the NAPE area.
The case revealed itself when in the early hours of January 11, two local men were stopped by casino security after a staff member of the cage noticed that the gaming chips they were trying to exchange for others of lesser value were counterfeit.
A total of 15 gaming chips with a face value of HKD100,000 each were on the line.
Questioned by the PJ, the men told the police that they had gotten the chips from a man they met in November. He said that he had chips belonging to a client in his possession and that he would sell them for a slightly lower price (HKD1,471,500).
Since they wanted to acquire the chips for a similar amount, the victims accepted the deal and went to meet the man in a VIP room at the casino and complete the transaction.
After the transaction was completed, the main suspect and the three men who were with him left the room. The two victims then went to the casino to exchange the chips to play, which was the moment they were caught.
After investigation, the PJ was able to detain the main suspect in the Northern District, along with the three men who are considered accomplices to the crimes.
The main suspect confessed to the PJ that he had been in contact with the victims, but denied selling them the counterfeit chips. The other three refused to cooperate with the police and maintained their silence.
According to the
victims, of the HKD1,471,500 lost in the scam, HKD392,500 belonged to the first victim, while the remaining HKD1,079,000 was from the second one.
The PJ is still investigating this case to locate the cash the victims paid. They suspect it is in the possession of a fifth suspect.