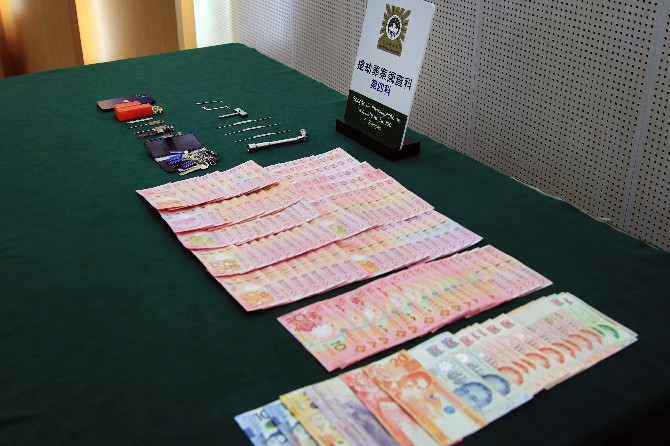 Two construction workers who are mainland residents are being accused of breaking and entering an apartment located at Rua Nova à Guia and stealing cash and jewelry worth around 25,000 patacas, a Judiciary Police (PJ) spokesperson said yesterday morning during a special press conference at PJ headquarters.
The case was revealed by the victim, a local woman in her 40s who went to PJ in the early hours of December 26 to file a complaint.
According to the victim’s report, she left her home on December 25 at around 6 p.m. and returned about 11 p.m.
Upon arriving home, she immediately noticed that her bedroom had been ransacked by someone who had also broken in to one of her drawers.
She realized she had lost a white gold necklace and her collection of Chinese zodiac commemorative banknotes, valued at about 25,000 patacas in total.
The PJ investigators requested access to the surveillance cameras of the apartment building. In the footage, they spotted two suspects who entered the building at around 8 p.m. that day and left about an hour later.
The investigators were able to identify the suspects using the footage, and they were arrested the next day at around 1 p.m. while exiting a hotel unit in the city.
Both suspects denied the accusations, refusing to collaborate with the PJ. However, the investigators found in a body search several banknotes matching the ones the victim reported as lost, as well as a receipt for the acquisition of a mobile phone.
According to the PJ spokesperson, the clothes both suspects were wearing at the time of their apprehension by police also matched the clothing seen in the footage from the building surveillance cameras.
Following the lead of the mobile phone receipt, the PJ also found that the suspects had used several of the commemorative banknotes to acquire the phone, notes that were still in the shop’s possession.
During the press conference, the PJ also displayed several tools and copies of keys, which were allegedly used to break-and-enter into the apartment and potentially into others. However, the spokesperson did not want to speculate on such a matter for the time being.
Despite the lack of collaboration from the suspects, the PJ believes that there is strong evidence of the two suspects’ involvement in this theft. The case has been transferred to the Public Prosecutions Office for formal charging and further investigation.