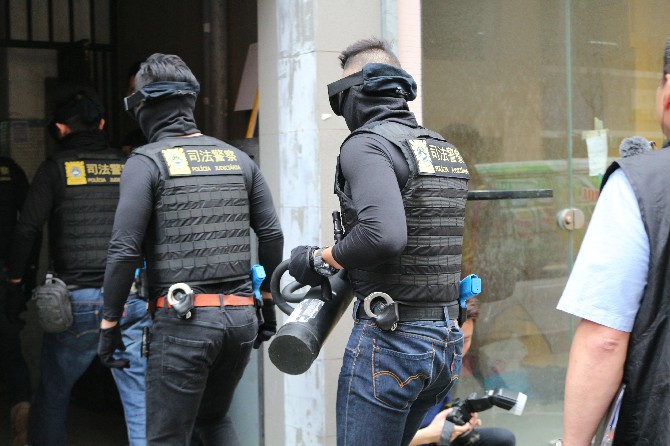 The Public Security Police Force (PSP) has reported two cases involving two individuals who presented false declarations of their wealth in order to be admitted to social housing.
During yesterday’s joint police press conference, the PSP gave details about the two cases. Originally, the Housing Bureau (IH) had forwarded both cases to the prosecution authority, which later handed the investigations over to the police department on March 26.
The suspect of the first case reported is a 79-year-old local man who applied for government-subsidized housing in 2017. The applicant declared that his family had three members: himself, his wife and son.
He omitted the fact that he owned a property in Zhuhai, however. The IH believes he hid the information deliberately.
The suspect remained outside of Macau, presumably in Zhuhai, until May 25. He was crossing the border from Zhuhai to Macau and was intercepted by the PSP at a border immigration checkpoint.
The suspect claimed he was unaware that applying for social housing meant he was obliged to declare his property outside of Macau. He also confirmed that he lived in mainland China.
The suspect of the second case is surnamed Teng, who is aged 23 and currently unemployed. In January 2018, Teng applied for social housing. His application involved himself and no one else.
At the time, the IH discovered that he had over 330,000 Hong Kong dollars in savings in his bank account. However, he omitted this information in his IH application. When the housing authority discovered the money, which exceeded the maximum income requirements for social housing, the bureau reported the case to the prosecution authority. The young man acknowledged his wrongdoing to the PSP.
The IH has marked both suspects as ineligible for social housing. Currently, the two face charges of falsifying information.
In the first half of 2019, the IH handled 505 social housing applications. Fifty applications were confirmed to have involved false documents. The housing authority disqualified these applicants from living in social housing.
In 2013, a family of two applied for social housing. The applicant reported a net asset value of 130,000 patacas. The family applied for both social housing and a subsidy to cover their residence expenses while waiting for government subsidized housing.
However, the IH’s investigation found that the family’s actual net asset value was 1.08 million patacas more than the maximum. Eventually, one of the applicants was sentenced to 10 months jail, and the other was given a one-year jail sentence. Both were given suspended sentences.

Woman suspected of
sexually assaulting minor
An Indonesian national has become the suspect in a sexual assault case, the Judiciary Police (PJ) reported yesterday. The victim is a 5-year-old girl.
The female suspect was hired in February by a local family as a domestic helper. On May 18, the girl’s mother spotted blood stains on her daughter’s undergarments. She immediately took the girl to the hospital to see a doctor.
Under the repeated questioning of her guardians’, the child said that, on May 18, the suspect had inserted her fingers into the girl’s genitals while giving her a shower.
The PJ detained the woman at her employer’s house and took her to the police station for investigation. The worker denied the accusations and refused to cooperate with the police authority.
The PJ believes that the alleged crime did occur based on the case’s evidence. The police authority has already handed the case over to the prosecution authority.