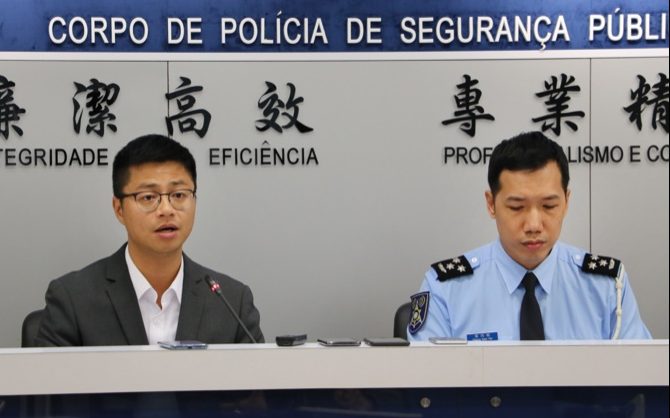 A 49-year-old woman has been accused of aggravated assault causing bodily harm to another woman, a 20-something-year-old who shared the same house with the suspect, the Judiciary Police (PJ) spokesperson informed during yesterday’s joint police press conference held at the Public Security Police Force (PSP) facilities.

The case occurred on November 15 at around 11 p.m. and was initially reported to the Taipa Police station, which was informed that two Filipino nationals had had an argument and one of them had injured the other with a knife in an apartment located on Rua de Nam Keng.

Deployed to the location, the officers found out that the two women, both non-resident workers, and five other women also at the venue when the incident occurred shared the apartment.

At about 10 p.m. that evening, the suspect arrived home and went to her room where the victim and the other residents of the house were socializing.

The suspect claimed that she understood that the victim was gossiping about her and she became angry about it. She then slapped the victim.

Then the argument intensified and, as the victim rushed to her room to hide from the suspect, the suspect went to the kitchen and picked up a knife with a 27-centimeter blade, following the victim into her room.

The police said that the room had a wooden partition installed that separated the beds and so the suspect could not reach the victim. The suspect then made use of the fact that the partition did not go all the way to the ceiling to throw the knife to the other side, hitting the victim in the head.

According to the medical report of the hospital where the victim was taken, she sustained a cut in the head from the incident.

After concluding the preliminary investigation, the next day the PJ searched for the suspect in the house during the afternoon. Upon finding her, the suspect was taken into custody under the accusation of aggravated assault with a forbidden weapon, with intent to cause bodily harm.

The case was then transferred to the Public Prosecutions Office.