Crime | Young man accused of assault and rape of girlfriend 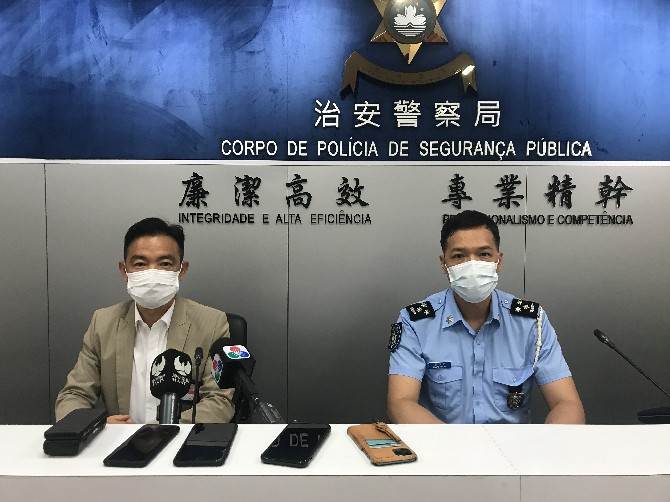 A 24-year-old local man stands accused of crimes including aggravated assault, rape, unlawful detention and illicit possession of a weapon, the Judiciary Police (PJ) reported yesterday during a joint police press conference.
The victim is his ex-girlfriend, a 25-year-old woman who works as a clerk. The suspect, surnamed Lau, is a student.
The pair began dating in April. After about two months, Lau’s girlfriend decided to break up with him. At this time, they were living together in his apartment located in the Fai Chi Kei area.
On June 25, when the victim announced her decision to end the relationship, Lau became angry and refused. Lau physically assaulted the victim with a baseball bat and demanded that she stay with him while holding a knife.
In order to protect herself from imminent danger, the victim successfully deterred Lau from further attacking her again by claiming that she would stay in the relationship. The victim was not able to leave the apartment that day.
The next day, on June 26, the suspect demanded sex from the victim. She was forced to comply, as Lau threatened to hurt her if she did not.
On June 27, the victim convinced Lau to leave the house for work and Lau allowed the victim to leave the house. Once she left the apartment, the victim reported the case to the police department.
PJ officers arrested the man at his apartment that same day. Lau admitted that he had assaulted his girlfriend but denied the accusations of imprisonment and rape.
On June 29, the PJ handed the case over to the prosecution authority. The police department believes that there is sufficient evidence to prove that Lau assaulted the victim multiple times and raped her.
Last month, a civil servant from the Health Bureau was charged with raping his wife and accused of domestic violence.
The case was similar to Lau’s. The suspect, surnamed Tam, was asked for a divorce by his then wife. In response, Tam raped his wife. Tam’s wife first filed a rape complaint to the police authority.
In 2016, a Vietnamese man nearly stabbed his ex-girlfriend to death after the victim attempted to break up with him.

Woman loses 4.89m in money exchange scam
A mainland woman has reported a loss of HKD4.89 million in a fraud case, the Judiciary Police (PJ) reported yesterday.
The victim is a 33-year-old mainland woman who claims to be a businesswoman. On June 18, the victim contacted the suspect through an intermediate friend. The victim asked the suspect to exchange currency with her.
The suspect is surnamed Lai. Lai and the victim agreed that the woman would transfer HKD4.89 million from her VIP room account to another VIP room account in exchange for 4.5 million yuan, which Lai would provide.
The 25-year-old Lai agreed to the deal. However, after the victim transferred the money, she did not receive the yuan.
On June 29, the victim’s friend reported the case to the PJ on behalf of the woman, as she was in mainland China and could not come to Macau due to Covid-19 restrictions.
The PJ found Lai, who is a mainland resident, working in Macau as a salesman. Lai refused to cooperate with the police authority. However, based on CCTV footage, the PJ believes that Lai withdrew the money from the VIP room bank account and charged him with fraud.

Drunk driver given one-year ban
A man who works as a driver has been banned from driving for one year after he was involved in a car accident while intoxicated. Nobody was injured in the car accident.
The accident happened around 7:30 a.m. on June 26. The police discovered the car accident on Avenida Dr. Sun Yat-Sen, where two light-duty cars had collided.
The suspect, surnamed Chan, is a 32-year-old Macau resident. Chan was found at the accident and he admitted having consumed alcohol before driving. He was tested with 1.95 grams of alcohol per liter of blood.
Chan was sentenced to six months and 15 days imprisonment with a suspended sentence of two years. He is also banned from driving for one year.