Crisis is rocking Latin America. Peru’s leader has a plan to escape it 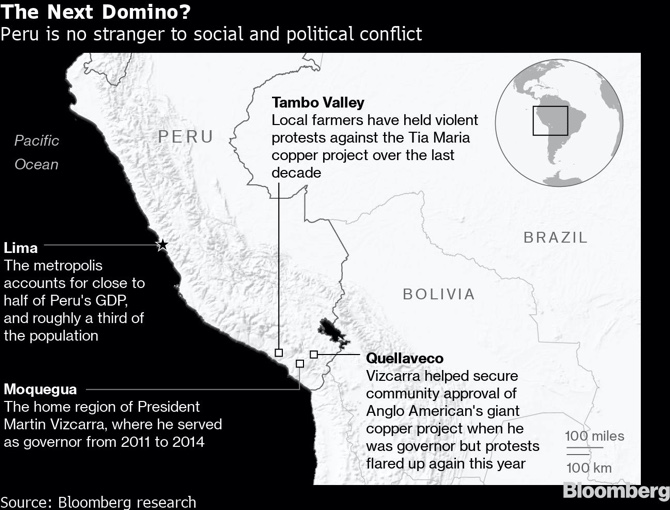 Roadblocks of mud, sticks and steel wire bar the entrance to villages lining the northern side of the Rio Tambo, a sign of revolt in the fertile valley cultivated since Inca times.

For almost a decade, the farmers of this green strip wedged between the Andes mountains and the Pacific Ocean have resisted the construction of a copper mine they say will pollute the water course and destroy their livelihoods. Now they feel betrayed by Peru’s president after his government gave final approval to Southern Copper Corp.’s Tia Maria project.

“We can’t allow it,” said councilwoman Zulema Quispe, who was navigating the barricades on the back of a motorcycle. Fields tilled for centuries will be tainted for future generations by the mine to be located just half a mile away, she said. “The president is giving priority to a multinational company and we won’t accept it.”

To the outside, Peru looks like an island of calm in the sea of unrest sweeping South America. But the anger of farmers in the southern region of Arequipa shows the country isn’t immune to the kind of malaise beyond its borders—and that President Martin Vizcarra holds the key.

Vizcarra is engaged in a high- stakes experiment to harness public outrage over rampant corruption and blow up the establishment, while trying to keep Peru’s mining-dependent economy on track. His signature decision to dismiss the opposition-controlled Congress this fall has won him allies and emboldened his detractors at a time when protests have rocked neighboring Bolivia and Chile to the east and south, and Ecuador and Colombia in the north.

Vizcarra, whose government just lost a third cabinet minister in two months, acknowledges the threat of turbulence in Peru, but says dissolving parliament has helped ease “enormous” political tensions. Elections for its replacement on Jan. 26 will offer a first indication whether he’s correct.

“There’s a dead calm after the dissolution of Congress,” said Mercedes Araoz, who resigned as vice president to protest Vizcarra’s decision. “But people are going to start presenting their demands to a government that has no clear agenda.” Without better relations between mining companies, communities and the government, social conflict will probably increase, she said.

Vizcarra, 56, took an unconventional path to power. An engineer who ran a family construction firm in the south for almost two decades before entering politics, he is a relative outsider in Lima. On his arrival, he shunned the capital’s elites and surrounded himself with a small circle of confidants, appointing allies from his native Moquegua region to cabinet posts.

His political career was born out of street protests in Moquegua in 2008 when, as head of the local engineers’ institute, he led negotiations for a bigger share of mining royalties from Southern Copper. Two years later, he won the race for regional governor, and brokered talks to end community protests against Anglo American Plc’s plans to build a major copper mine.

His chance came in 2016 when he was elected vice president on Pedro Pablo Kuczynski’s ticket. Kuczynski quit less than two years later after becoming embroiled in the “Carwash” bribery probe centered on Brazilian construction giant Odebrecht SA, which ensnared three other Peruvian presidents. Vizcarra was first in line to replace him.

As president, he introduced reforms to clean up the judiciary and political parties, but faced with resistance in Congress, ultimately dissolved the body. It was a controversial move that signaled his determination to take on the country’s elites. Peru’s Confiep business federation criticized the decision.

For Araoz, it was a distraction “by the superficial, frivolous part of politics” that underscored the Vizcarra administration’s failure to meet “the promise of delivering better social welfare” and revving up economic growth.

Yet it won overwhelming public backing. Congress was deeply unpopular and the president’s approval rating soared to 80% after he dismissed it on Sept. 30. His ratings remain high as he pushes an anti-corruption reformist program.

Next month’s elections are still hard to call. A poll by the Institute of Peruvian Studies last month found about 5% support for the Popular Force of Keiko Fujimori—daughter of disgraced former president, Alberto Fujimori, and a vocal opponent of Vizcarra—with 9% for center-left Popular Action and 5% for the centrist Purple Party, both more receptive to the president. But after several tumultuous years, the majority (61%) said they planned to cast a protest vote or hadn’t decided.

While Vizcarra doesn’t have a political party of his own and isn’t backing any candidates, some may throw their support behind his program regardless. But they may also seek to probe his shuttering of parliament. The Constitutional Court will set the tone when it rules on the decision’s legality, possibly in coming weeks.

Peru’s political history has been marked by military coups, wars and corrupt leaders since its independence from Spain almost two centuries ago, leaving profound scars on society to this day. Like many of its South American neighbors, it faces a kind of internal reckoning.

“Peru is a country with a weak state, extreme inequality and weak institutions,” said Steven Levitsky, a professor of government at Harvard University who has written widely on Peruvian democracy. “So there’s always a risk of protests and a risk the government falls.”

On the verge of economic catastrophe 30 years ago, the country was opened to free trade and investment and fiscal prudence embraced. It went on to post the fastest average growth and lowest inflation among major Latin American economies for two decades. But while average incomes have more than tripled, the health, education and transportation systems are failing and crime and corruption have proliferated.

Peru is notorious for social conflict; barely a week passes without some demonstration against a mining company, a government policy or incomplete public works. So frequent are conflicts that an ombudsman tracks them monthly.

Some business leaders regard Vizcarra as making things worse by flip-flopping, caving to protesters and backtracking when faced with opposition on issues from mining to oil. His government upheld the Tia Maria mine permit but said a watchdog will review the project’s environmental study, and that community opposition needs to ease before construction can start.

“We need to have predictability and the security that legal frameworks are going to be respected to carry out long-term investments,” said Maria Isabel Leon, Confiep chairwoman.

“I don’t get the impression this government wholeheartedly believes in the private sector,” said Roque Benavides, chairman of Compania de Minas Buenaventura SAA, which has stakes in the country’s biggest copper and gold mines.

Vizcarra’s government is working with the private sector to develop the economy, his cabinet chief, Vicente Zeballos, said in an emailed response to questions, adding that the president is liked and respected by the majority of Peruvians. Economic growth is poised to accelerate next year, and the president is moving to win over voters. Days after Chile’s streets exploded in protest in mid-October, he announced a package of measures including an increase to the minimum wage and boosting access to cheaper medicine.

Vizcarra justifies shaking up the system on the grounds that “if things aren’t working, you have to change them.” He recently said his mantra to cabinet members is: “We’re not here to leave things as they are.”

Still, a question mark lingers over how long he can continue his balancing act, particularly since mining remains the main driver of the economy.  John Quigley, Bloomberg