CTM preparing to transition customers from 3G to 4G 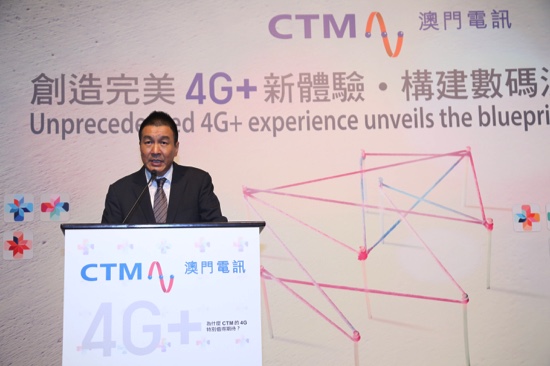 After being recently awarded a 4G operating license, CTM is now putting in its “full effort” to build the 4G network and views 4G as “a key development project.” The telecom company announced yesterday, during a media lunch held at the Macau Tower, that it will invest up to MOP1.6 billion in the next three years for network expansion. Of this sum, 600 million is to be allocated to the 4G project and MOP200 million to an integration project that will enable the 3G network to cope with the development of the 4G services. After that project is completed, the 3G network is expected to run twice as fast.
“We are working day and night for the preparation [of the 4G network],” said CTM’s chief executive officer Vandy Poon, adding that the target for this year is full coverage of the territory, even though the contract only demands a 50 percent coverage in 2015. The service tariffs have not been established yet, but Mr Vandy Poon said that it would be “reasonable value for money.”
“It’s a long-term investment. Our plan is to invest MOP600 million [in 4G] and also invest MOP200 million in 3G. (…) Once customers are used to the 4G network, they will tend to switch, so that 4G will be the dominant network.”
During his speech at the lunch, Vandy Poon reviewed the telecom operator’s achievements from last year. In 2014, CTM obtained a revenue of MOP4,875 million and a profit of MOP1,112 million.
The company attributes the growth to enterprise sales, Internet, mobile and leased line services. During the past year, CTM made investments totaling MOP519 million in various projects, including the modernization and expansion of the mobile and Internet networks.
Compared to 2013, there is a clear tendency towards increasing the number of mobile (788,616 in 2013; 813,978 in 2014) and Internet customers (152,291 in 2013; 161,737 in 2014). On the other hand, after a period of oscillation, the number of fixed-phone customers has been decreasing since 2012 (172,126 in 2012; 168,107 in 2013; 163,266 in 2014).
With regard to other public contracts, CTM highlighted in a press release distributed during the media event, that it has become the contractor for the government-owned Macau Basic Television Channels Limited. The company, which was created to ensure the transmission of a basic 49-channel television package, had a MOP10 million budget in the first year. According to information released one year ago by the Bureau of Telecommunications Regulation (DSRT), before the creation of the company, the public antenna companies were retransmitting the signals, whilst now they “only do the connections to the interior of residential units.” CTM’s role, on the other hand, related to installing systems and providing maintenance services, as well as providing the network, DSRT stressed.
Another public tender won in 2014 by CTM was the operating contract for the “WIFI Go” wireless broadband system. The company increased the number of Wi-Fi hotspots all over the region to the point where they now exceed 500.
Vandy Poon also commented on last week’s cyber-attack that affected CTM’s Internet network: “It was a very rare type of attack, and we need to confirm the source of the attack. We have been investing a lot into the network’s security.” The CEO added that, at the time of the attack, CTM’s firewall was “working properly,” and therefore, “successfully prevented malware from entering Macau.”  “It worked, but the side effect slowed down Internet speed,” he concluded. PB

Partnership with MacauPass to change lifestyle

CTM has signed an agreement with MacauPass and MOME as part of plans to develop a mobile payment service. Yesterday the telecom operator set up a demo zone, where it was possible to make a transaction by simply touching a smartphone on a MacauPass reader, as if using a smart card.
According to Vandy Poon, the project aims to “integrate the MacauPass into a mobile account, in order to be able to use it on a mobile phone.” This way, the mobile could become a “mobile wallet.” In addition, CTM will set up Wi-Fi hotspots on all bus routes that are operated by Transmac to let passengers enjoy internet access while on a move. The project is expected to become operational this year. “It will change the lifestyles of citizens and service users in Macau. It’s a very powerful application,” Vandy Poon said.