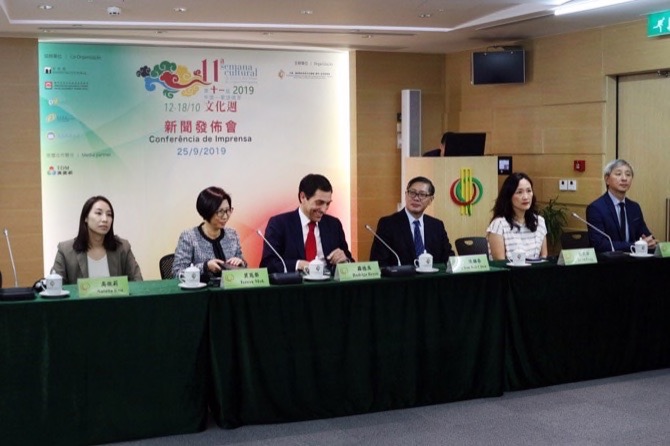 The program and schedule for the 11th Cultural Week of China and Portuguese-speaking Countries will kick off on October 12 at the Macau Fisherman’s Wharf (MFW) and was presented yesterday by the organizers in a press conference held at the Permanent Secretariat of the Forum for Economic and Trade Co-operation between China and Portuguese-speaking countries – Macau (Forum Macau).

The event features two changes to the program this year, namely the inclusion of the third Brazilian Movie Festival in China, which will include Macau on its tour through several cities and regions of China.

Another significant change, highlighted by Forum Macau’s Deputy Secretary-General, Rodrigo Brum, is the change to the scheduling of the “Theater Performances” that will take place in addition to the week’s program in order to offer the audience a longer period of activities, and, above all, as Brum noted, “not to create a direct competition with the other activities of the program.”

In this way, the Theatre Performances will take place at the Old Court Building starting from October 22 until 27.

The Brazilian Cinema Festival will be held after November 24, added the Coordinator of the Support Office of Forum Macau, Teresa Mok, but the dates have still not been confirmed.

Questioned by the media as to precisely the number and similarity of events held in the month of October – which includes not only the Cultural Week but also the Lusofonia Festival and the Macao International Trade and Investment Fair (MIF), Brum noted that the overlap would create synergies between related activities. “Although there is not a formal partnership of any kind established, in fact, the idea to have these events happening simultaneously or consecutively is a way to take advantage of the synergies created,” said Brum.

He added that it might “even allow some of the artists and performers that come to the Cultural Week to stay a little longer and join the Lusofonia Festival or other events. It’s a way to take advantage of their stay and travel to Macau.”

As for the other activities of the program, they will run from October 12 to 18 mostly at the MFW as well as at other venues across town.

They will include art exhibitions; an arts and crafts fair from China and Portuguese-speaking countries; stage shows of music and dance and several gastronomy events including food tastings from different Portuguese-speaking countries named “Flavors of the World”; as well as cooking workshops, with some to take place at the Institute for Tourism Studies and at the Macau University of Science and Technology.

Besides the main stage entertainment at the MFW, there will be several stalls to allow visitors to experiment with food products, snacks and traditional games from Portuguese-speaking countries.

Questioned on the topic, Mok added that this year’s budget for the whole event is about MOP9 million.

As a special note, and besides the two new additions to the program, Brum noted in his speech a third aspect in which this year’s Cultural Week would be different. According to the official, the Forum Macau has invited, in a bid to promote a wider disclosure of the events, media outlets from different Portuguese-speaking countries who will carry out wider media coverage of the event abroad.

Meanwhile, questioned on the status and progress of the construction of the new Forum Macau building in the Nam Van landfill area, Mok said that the first phase, including mostly meeting and administrative spaces, was expected to be concluded by the end of this year.

“As for the second phase, in which would be included the offices and also the exhibition space, we do not have yet a tentative date for the conclusion of the works since that second phase has not been tendered yet,” said Mok. “We will only do that when the first phase is about to be concluded.”

On the same topic, and admitting that he has not yet visited the building, Brum said, “we can see that the building in terms of its structure and outer finishing is about done. I have not visited the interior yet, but I believe that it is according to the expected.”