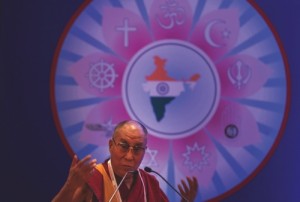 The Dalai Lama praised Chinese President Xi Jinping on Saturday for being “more realistic” and principled than his predecessors, a day after Xi’s three-day visit to India ended.
The Tibetan Buddhist spiritual leader has lived in exile for decades in India’s Himalayan foothill city of Dharamsala, after fleeing China following a failed 1959 uprising. The arrangement has irritated Beijing, which has long accused the Dalai Lama of fomenting unrest and encouraging Buddhist monks to self-immolate in demanding more autonomy for Tibet, which borders India, Bhutan and Nepal.
However, Beijing’s attitude appears to be shifting, the Dalai Lama said, noting that China’s Communist leaders, who officially are atheist, are now “mentioning the importance of spiritualism.”
“There are a lot of changes,” the Dalai Lama told reporters.
He said that since becoming president in March 2013, Xi has demonstrated “through his handling of problems, he is comparatively more realistic and with more principles” than his predecessors.
The remarks brought no immediate comment from China’s government or state media. However, Beijing has previously denounced the Dalai Lama as a separatist traitor and warned that any of his moderate comments are deceptive. China says the Himalayan region has been part of Chinese territory for centuries, while Tibetans say it was virtually independent until China occupied it in 1950.
India is home to a large Tibetan community as well as Tibet’s government-in-exile. During Xi’s visit to New Delhi this past week, dozens of Tibetan protesters shouting “Hands off Tibet!” staged a noisy demonstration outside the building where he was meeting with Indian Prime Minister Narendra Modi.
The Dalai Lama also said Saturday on the sidelines of an interfaith meeting in New Delhi that India and China should put aside any animosities they harbor over a long-festering border dispute and “remain peaceful on the basis of mutual trust,” according to Press Trust of India.
The border dispute, over which the two nations fought a bloody monthlong war in 1962, has complicated relations for decades, with the two militaries in a tense standoff even last week while Xi was in New Delhi. Both Xi and Modi vowed special efforts in resolving the dispute as they work to boost economic cooperation.
The Dalai Lama also praised India for proving that communities can live peacefully together, and said India must show its example of religious harmony to the rest of the world.
“India is the only country where all major world religions live together, not only in modern time but over 1,000 years,” he said in opening the two-day interfaith meeting he had organized for leaders from nine religious communities to mull some of India’s most pressing and seemingly endemic problems — from gender violence and widespread poverty to environmental degradation and communal violence. Katy Daigle, New Delhi, AP