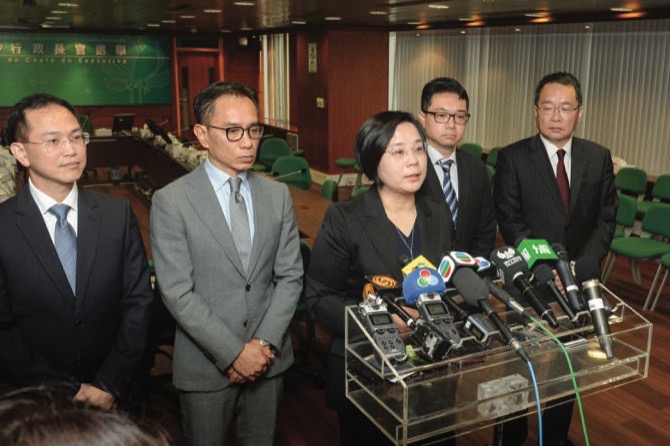 Song Man Lei talks with the press after the meeting

The submission of registration forms by candidates for the Electoral Affairs Commission for the Chief Executive Election is scheduled for April, the Commission announced on Friday.

Chairman of the Commission, Song Man Lei, reported that, between April 8 and 23, lega person voters should register their representatives authorized to nominate candidates for the Chief Executive Election Committee.

Candidates for the Chief Executive Election Committee should then submit their candidature applications to the Electoral Affairs Commission from 24 April to May 7.

Moreover, in April, the Public Administration and Civil Service Bureau (SAFP) will hold a briefing on the Committee election, with the detailed schedule and location to be announced later.

During the meeting, the Commission also discussed a webpage on election matters that would release the latest news and information.

When questioned about matters concerning the candidates for Chief Executive, Song explained that lawmakers who intend to run for CE will have to suspend their duties as lawmakers once they are admitted as candidates. The suspension should start from the moment a lawmaker is admitted, and last until the announcement of the election’s results.

The Electoral Affairs Commission is responsible for coordinating the process to choose the 400-member Chief Executive Election Committee, and thereafter to coordinate the actual election of a new Chief Executive. This must be determined by June 16.

Regarding the schedule for the CE election, Song noted that the Commission has already started discussions.

Earlier last week, the president of the Legislative Assembly (AL), Ho Iat Seng, acknowledged that he was “actively considering” his candidacy to become the next Chief Executive when the successor to Chui Sai On is chosen later this year. Also last week, Secretary for Economy and Finance Lionel Leong remarked that he will “listen to the community’s opinions and consider them comprehensively” when choosing whether to run in the election [more on page 4]. JZ