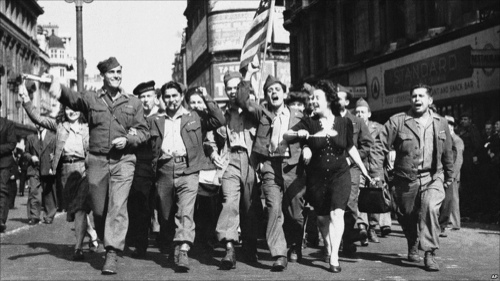 Japan has surrendered to the Allies after almost six years of war.
There is joy and celebration around the world and 15 August has been declared Victory in Japan day.
The end of war will be marked by two-day holidays in the UK, the USA and Australia.
After days of rumour and speculation, US President Harry S Truman broke the good news at a press conference at the White House at 1900 yesterday.
He said the Japanese Government had agreed to comply in full with the Potsdam declaration which demands the unconditional surrender of Japan.
Supreme Commander General Douglas MacArthur will receive the official Japanese surrender, arrangements for which are now under way.
Later, in an address to a crowd that had gathered outside the White House President Truman said: “This is the day we have been waiting for since Pearl Harbor. This is the day when Fascism finally dies, as we always knew it would.”
But he warned that the task of creating a lasting peace still lay ahead.
At midnight, the British Prime Minister Clement Atlee confirmed the news in a broadcast saying, “The last of our enemies is laid low.”
He expressed gratitude to Britain’s allies, in the Dominions of Australia and New Zealand, India, Burma, all countries occupied by Japan and to the USSR. But special thanks went to the United States “without whose prodigious efforts the war in the East would still have many years to run”.
The day coincides with the state opening of Parliament which took on an air of a victory parade.
Thousands braved the rain to watch King George VI and the queen driven down the Mall in an open carriage.
Later tonight, the King addressed the nation and the Empire in broadcast from his study at Buckingham Palace at 2100.
“Our hearts are full to overflowing, as are your own. Yet there is not one of us who has experienced this terrible war who does not realise that we shall feel its inevitable consequences long after we have all forgotten our rejoicings today.”
The Royal Family greeted cheering crowds from the Palace balcony. Princess Elizabeth and Princess Margaret later mingled with the crowds outside the Palace.
Historic buildings all over London are floodlit and throngs of people have crowded onto the streets of every town and city shouting, singing, dancing, lighting bonfires and letting off fireworks.
But there were no celebrations in Japan – in his first ever radio broadcast, Emperor Hirohito blamed the use of “a new and most cruel bomb” used on Hiroshima and Nagasaki for Japan’s surrender.
“Should we continue to fight, it would not only result in the ultimate collapse and obliteration of the Japanese nation but would lead also to the total extinction of human civilisation.”

The Allies had delivered Japan an ultimatum to surrender on 28 July 1945.
When this was ignored, the US dropped two atomic bombs on Hiroshima on 6 August and Nagasaki on 9 August, the day Soviet forces invaded Manchuria.
The Allies celebrated victory over Japan on 15 August 1945, although the Japanese administration under General Koiso Kuniaki did not officially surrender with a signed document until 2 September.
Both dates are known as VJ Day.