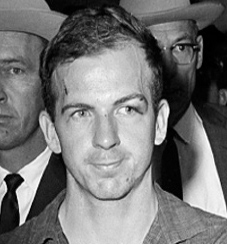 The man accused of assassinating the US President, John F Kennedy, has himself been shot dead in a Dallas police station.
Lee Harvey Oswald, a 24-year-old former Marine, was being transferred from police headquarters to the county jail, at the center of a large crowd of police officers, reporters and camera crews.
The event was being covered live on television, and Americans across the country watched in astonishment as a man – later identified as Jack Ruby, a Dallas nightclub owner – stepped forward, drew a gun and shot Mr Oswald at point-blank range.
Mr Oswald fell to the floor, grasping his stomach, as a confused scuffle broke out between police, reporters and the gunman. An ambulance rushed Mr Oswald to the Parkland Hospital – the same hospital which had fought to save President Kennedy’s life two days earlier – but he died within minutes of his arrival.
Mr Oswald was arrested about an hour after the assassination of John F Kennedy, carried out as the President’s motorcade passed through the Dealey Plaza in Dallas.
He was initially taken into custody for the murder of a policeman, JD Tippit, who appears to have recognized him and approached him just 45 minutes after the killing of the President. Soon after, Mr Oswald was also charged with the President’s assassination.
He strongly denied that he carried out the assassination, saying to reporters, “I’m just a patsy.” Police gave no explanation of how Jack Ruby came to be in the police headquarters.
The building had been under heavy guard after several calls making threats against Oswald’s life. Ruby came to Dallas from Chicago 10 years ago. He runs a downtown striptease club, and is said to have links with organized criminals.
Police said Ruby had told them, “I didn’t want to be a hero – I did it for Jacqueline Kennedy.” They said he wanted to spare the president’s wife the ordeal of the trial of the man accused of killing her husband. Ruby has been formally charged with murder and is now being held in custody without bail.

Jack Ruby was convicted of the murder of Lee Harvey Oswald on 14 March 1964. The conviction was overturned on procedural grounds, but before a re-trial could take place, Ruby died of cancer in prison on 3 January 1967. Considerable controversy remains over whether Lee Harvey Oswald was in fact guilty of the murder of John F Kennedy.
The Warren Report, commissioned by President Johnson five days after Oswald’s shooting to look into the assassination, concluded that he was the lone killer.
A later investigation by the House Select Committee on Assassinations during the late 1970s found that President Kennedy had been killed as a result of a conspiracy, although this report was later discredited.
Lee Harvey Oswald’s body was exhumed in 1981 to lay to rest another theory – that the man who was buried was a Soviet agent who had taken Oswald’s identity to carry out the killing.
The autopsy confirmed that the body was indeed that of Oswald. But the conspiracy theories – ranging from claims that the president arranged his own death, to allegations that the driver was the murderer – continue to be hotly debated.