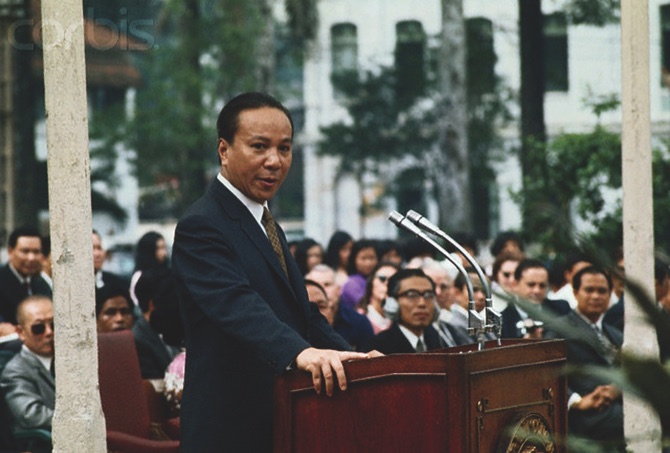 The President of South Vietnam has been forced to resign accusing the United States of betrayal.

In a TV and radio address, outgoing President Nguyen Van Thieu said his forces had failed to stop the advance of the Vietcong because of lack of funds promised to him by the Americans.

In a scathing attack on the US, he suggested US Secretary of State Dr Henry Kissinger had tricked him into signing the Paris peace agreement two years ago, promising military aid which then failed to materialise.

He continued: “The United States did not keep its promise to help us fight for freedom and it was in the same fight that the United States lost 50,000 of its young men.”

The general – a fervent anti-Communist – first came to power in 1965 having helped overthrow the government of President Diem in 1963 with US support.

But the appetite for war has gradually waned in the US and at the same time, Thieu has stripped South Vietnam of many of its democratic institutions.

The pressure for him to resign has been intense – from politicians in Saigon as well as from peace negotiators representing North Vietnam who will not have any dealings with a man they regard as a dictator.

In the last few months, the communist Provisional Revolutionary Government (PRG) has said President Thieu must step down before any peace talks with Saigon could begin.

US President Gerald Ford, however, denied his government had asked President Thieu to relinquish power. “There was no pressure by me or anybody lese form here. He made the decision all on his own,” he said in a TV interview.

North Vietnamese troops have surrounded Saigon and military expert are predicting the city will fall within weeks if not days.

Five divisions of South Vietnamese infantry troops, a division of US Rangers and two brigades of US Marines in position around Saigon are outnumbered by more than two to one.

The Paris peace accord, agreed between communist Le Duc Tho, Henry Kissinger and reluctantly signed in January 1973 by President Thieu, produced a ceasefire and allowed for the exchange of prisoners of war.

Later that year the Nobel Peace Prize was awarded to Henry Kissinger and Le Duc Tho but the Vietnamese negotiator declined it saying that a true peace did not yet exist in Vietnam.

Gerald Ford took over in 1974 after President Nixon resigned over the Watergate scandal.

With no US support, the North Vietnamese army were able to secure major cities in the south and reached the capital, Saigon, by April 1975.

Nine days after Nguyen Van Thieu’s resignation, the Vietnam war ended with the fall of Saigon. Thieu escaped to begin a life in exile – first in London, then in Boston.

He died in Massachusetts in September 2001.