This Day in History | 1979 – Mob destroys US embassy in Pakistan 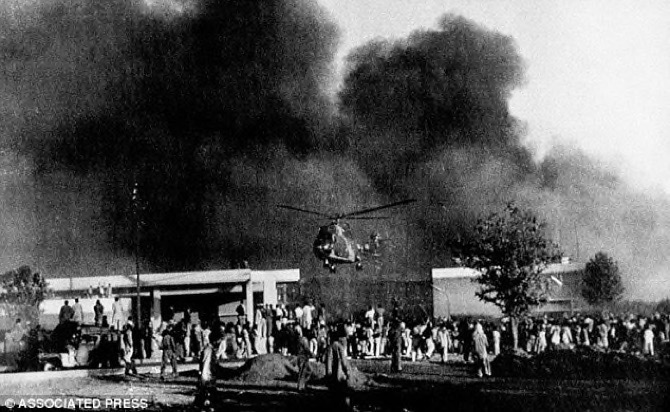 A mob in the Pakistani capital, Islamabad, has burned the US Embassy to the ground, killing a US marine.

The five-hour siege began as an organized student protest outside the locked gates of the embassy compound.

But the demonstration grew violent as protesters pulled down part of the outer wall and broke into the compound itself. Gunfire broke out, and the marine, who was standing on the roof of the building, was shot.

The attacks are believed to have been triggered by a radio report from the Iranian leader, Ayatollah Khomeini, saying Americans were behind the occupation of Islam’s holiest site, the Great Mosque in Mecca, Saudi Arabia, yesterday.

The US State Department has described the broadcast as “irresponsible, outright, knowing lies”.

The Saudi Arabian authorities have also issued statements saying the Mecca incident was the work of Muslim fundamentalists and no Westerners were involved.

American relations with Pakistan are already at a low point after the US cut off aid in April over Pakistan’s nuclear ambitions, and criticized the human rights record of Pakistani leader General Mohammed Zia ul-Haq.

As the protesters began smashing windows and setting fire to the building, more than 100 embassy staff took refuge in a steel-lined and windowless vault on an upstairs floor.

Those trapped in the room included US diplomats, Pakistani staff members and a visiting journalist from Time magazine. The Ambassador, Arthur W Hummel Junior, was outside the building when the attack began.

Staff inside were able to contact him, and it was Ambassador Hummel who raised the alarm and requested help from Pakistan’s government.

Meanwhile, protesters found their way onto the roof of the building, and staff members later said they began firing bullets down ventilation shafts.

General Zia ordered the Pakistan Army to rescue the trapped Americans, and soldiers brought the situation under control at about 1800 local time (1300 GMT), about five and a half hours after the attack began.

Several other American institutions in Pakistan were also targeted in what appears to have been an orchestrated day of anti-American violence.

Tensions are running high since 66 American citizens were taken hostage by Iranian radical students, who seized the US embassy in Tehran just over two weeks ago.

President Carter yesterday threatened the use of force for the first time after the Ayatollah Khomeini accused the American hostages of being “spies” – effectively handing down a death sentence on them.

During the search of the embassy compound following the siege, a further five bodies were found. One was an American, two were Pakistani staff members, and two were protesters.

Relations between the US and Pakistan remained uneasy until 2001, when Pakistan agreed to support the US-declared “war on terror”, and helped overthrowing the Taleban regime in Afghanistan.

Pakistan has also captured more than 500 members of al-Qaeda and handed them over to the US.

However, extremist groups within Pakistan continue to target US establishments there. In 2002 alone, there were seven attacks against the small American community which still lives and works in Pakistan.

The American embassy in Islamabad is now one of the most heavily-fortified in the world. US intelligence officials and diplomatic security staff analyze as many as five potential attack threats a day.

The Iranian hostage crisis caused a breakdown in diplomatic relations between Iran and the US in 1980.

The remaining 52 American hostages remained in captivity for 444 days, until their release on 21 January 1981.