this day in history: 1991 Hardliners stage coup against Gorbachev 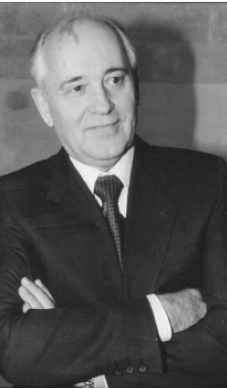 Soviet President Mikhail Gorbachev has been overthrown after a coup by Communist hardliners. Mr Gorbachev is reported to be under house arrest at his holiday home in the Crimea.
News of the coup was broken in an announcement on state radio earlier on Monday. It said Mr Gorbachev was “unable to perform his presidential duty for health reasons”.
Soviet television has since been broadcasting regular condemnations of Mr Gorbachev’s policies. The new leaders, headed by former vice-president Gennady Yanayev have declared a state of emergency.
In a televised broadcast, the eight coup plotters, who include the heads of the army, the KGB and the police, said they were saving the country from a “national catastrophe”.
Tanks are now patrolling the streets of Moscow but in spite of their presence thousands of people have come out to demonstrate against the takeover. They included the president of the Russian Federation, Boris Yeltsin.
Mr Yeltsin climbed on to a tank outside the Russian parliament building to confront the troops and appeal to the army not to turn against the people. He said the coup was a “new reign of terror” and called for civil resistance.
Despite a ban on demonstrations, several hundred demonstrators gathered outside the Kremlin calling for the reinstatement of the legal government.
Nearby troops made no move to break up the demonstration but the army is reported to have warned hospitals to be ready for “casualties”.
US President George Bush has called the coup a “disturbing development” and cut short his holiday to return to the White House.

The coup suffered from an apparent lack of planning. None of the opposition leaders was arrested and they continued to whip up public opinion and turn the army against the new regime. Less than three days after the coup its leaders attempted to flee the country. Mikhail Gorbachev was freed from house arrest and returned to power. Seven of the eight coup plotters were arrested – one committed suicide. The coup attempt brought to the surface widespread dissatisfaction with the Communist system. By the end of 1991 the Soviet Union has been replaced by the Commonwealth of Independent States – with many republics eventually gaining full independence.