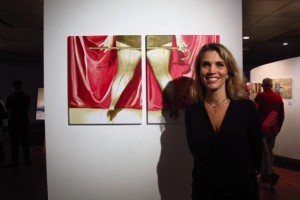 Sofia Bobone poses next to one of her paintings

Portuguese designer Sofia Bobone challenges herself with new attempts at painting, seeking to defy conventional standards of beauty.
The 44-year-old artist, who decided to dabble in painting three years ago, has had her artwork on show at the Casa Garden since last week. The exhibition will run until January 10.
Her debut solo exhibition features not only the focus of her painting exercises in her initial two years of training, galloping horses, but also what she deemed “the real curves of women”.
“I like the shape of human bodies, both male and female,” said Bobone, while pointing at two of the portraits showing the backs of buxom ladies. “I want to portray women in a nice and gracious way.”
“It is wildly different from what it’s supposed to be,” she further explained, reflecting on her choice of physique to depict. “Everyone is supposed to have a perfect body shape, relying on exercise and diets, yet it’s not always beautiful.”
Painting rounder subjects also allows the painter to get a grasp of color and shadow, which she applies in her works to a large extent.
Bobone also told the Times how the shape of horses helped inform her techniques, despite only knowing how to draw them as a designer. “Because horses are very difficult to draw,” she explained. “They have to be exactly in proportion, otherwise they would look strange.” Rather than powerful and strong, horses make the artist feel tranquil and calm.