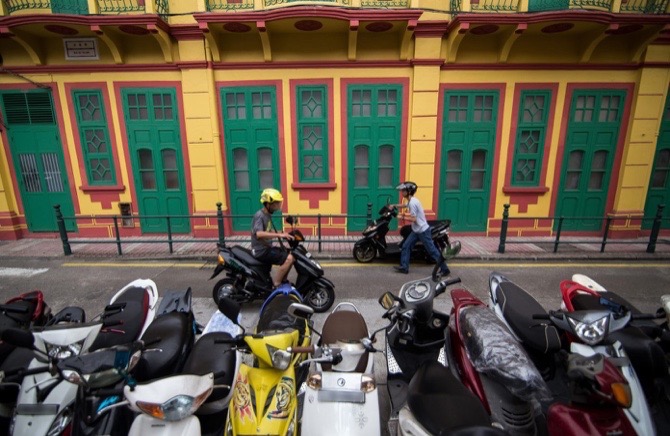 Last May, the topic of parking space design in Macau, namely for motorcycles, was brought to the Legislative Assembly (AL) by lawmaker Sulu Sou’s initiative.

Sou asked the government about the possibility of changing the current design of Macau’s “right-angled” parking spaces to diagonal spaces, or ‘angled bays’, following worldwide trends on the matter.

In reply, the Transport Bureau said it would not consider the design, claiming that adopting it would reduce the number of parking spaces available in the streets of Macau.

According to the lawmaker, there was initially a time when the bureau said it would “actively consider” the proposal. However, it has now revised its intentions.

In fact, diagonal parking, also known as back-in angle parking, has gathered support from municipalities and governmental organizations worldwide, who have adopted it as the safest solution in both street and off-street parking design.

According to a California-based parking design consultancy company, diagonal parking spaces have pros and cons.

As stated in their report on the topic, “the cons of angled parking spaces are that they usually require traffic to be one-way, which can be frustrating to drivers.”

As for the pros, the company highlighted the ability to park and exit the parking spaces, as well as the requirement for a smaller turning radius. The company also noted that diagonal spaces were “less likely to get blocked in (in the case of cars) and [less likely to lead to] entangled handlebars and side mirrors (in case of motorcycles).”

Similar remarks are found in a study by the Department of Urban Planning Affairs of the Ministry of Municipalities & Agriculture of the Kingdom of Bahrain, which compared different design solutions and angles ranging from 30 to 60 degrees.

The study found that for comfortable use, a right-angled parking spot needed to be double the width of a spot angled at 30 degrees, noting that this was especially important for cars, to allow door opening and the circulation of pedestrians between vehicles.

Other studies were conducted by municipalities in Brazil, Argentina, Hawaii and Spain. All found angled bays were the best solution for “narrow one-way streets” – as is the case for much of Macau – in order to “facilitate the circulation of traffic, especially of trucks and buses.”

David Percy, a professor of Mathematics at the University of Salford, U.K., presented a similar study in which he proposed simply repainting the lines, transforming right- angled parking spaces into 45-degree spaces, as a solution to the lack of parking spaces in parking lots.
Percy proposed a solution that would allow for more efficient use of existing parking spaces, by realizing that vehicles parked at 45 degrees had no need for wide central aisles, as the vehicles do not need to be completely pulled out of the bay, reducing the wide corridors between parking spots that are “wasting precious parking space.”

According to official statistics from the Transport Bureau (DSAT), as of the end of 2018, there were about 124,000 registered motorcycles in Macau. With an estimated 60,000 motorcycle parking spaces, this is more than double the number of parking spaces available.

Meanwhile, there were approximately 126,000 public and private parking spaces for cars in Macau.

Although according to the stance of transport officials the Macau government seems to have abandoned the idea of diagonal parking, it remains popular in the private sector.

Many private parking lots are adopting the solution to organize motorcycle parking and save space.

An example of this can be found in Macau, in the land plot granted by the government for the parking of public buses, in which a company used this system to design motorcycle parking for the use of company staff.

Other examples can be found across the city in several private parking facilities, showing that the government, private companies and residents seem to have very different ideas on this topic.

Last month, Sou held a poll on Facebook with over 1,700 people participating. The poll found 92% of voters supported a diagonal parking system, while the current system found support from only 8% of the respondents.