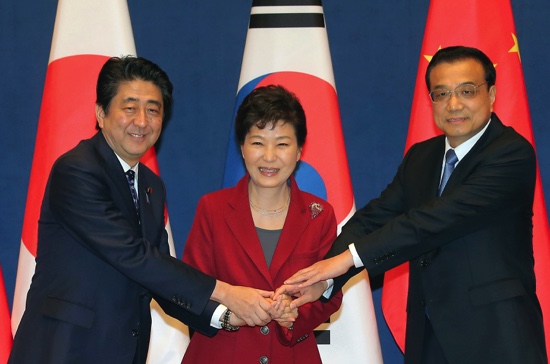 The biggest result of the first meeting of South Korean, Chinese and Japanese leaders in more than three years? More meetings.
But for three Northeast Asian economic and diplomatic heavyweights who spend a huge amount of time bickering over history and territory, the agreement for more dialogue at yesterday’s rare summit was a significant step forward. The long-running spat between Seoul and Tokyo, crucial U.S. allies, has been especially worrying for Washington as it looks to counter China’s rise and North Korea’s pursuit of nuclear bombs.
High-level contact between Tokyo and its two Asian neighbors nose-dived after hawkish Japanese Prime Minister Shinzo Abe took office in late 2012. Beijing and Seoul see Abe as whitewashing Japan’s wartime atrocities.
A joint statement issued after the meeting said the sides agreed to try to resolve history-related issues and improve ties by “facing history squarely and advancing toward the future.”
The countries also pledged to hold a leaders’ summit every year and push to deepen their economic cooperation by accelerating free trade negotiations among themselves. They also reaffirmed a resolve to resume stalled international negotiations on North Korea’s nuclear weapons program.
South Korean President Park Geun-hye said at a joint news conference with Abe and Chinese Premier Li Keqiang that the resumption of cooperation among the countries was “historically important.”
“I think we took a big step toward peace and prosperity in Northeast Asia,” Park said. The leaders did not take questions at the news conference.
Starting his speech with a friendly “Hello” in Korean, Abe said he exchanged opinions on how to achieve regional prosperity with Park and Li in a “considerably candid manner.” He said Japan would host a leaders’ summit next year.
“Due to the reason that everyone knows, a trilateral cooperation has been hampered over the past three years,” Li said through an interpreter. “We don’t want to see difficulties flaring again in trilateral cooperation and summit talks, and ups and downs occurring in bilateral and trilateral ties.”
Despite protests from Seoul and Beijing, Abe hasn’t yielded on his nationalism. Even so, the three countries, closely linked economically, are pushing to find a way to improve ties.
On Saturday, Park and Li met separately and agreed to work toward ratifying by the end of the year a bilateral free trade agreement that their legislatures have yet to approve.
Park is to meet Abe today in what will be her first formal one-on-one meeting with him since her inauguration in early 2013. Chinese President Xi Jinping met with Abe last November on the sidelines of a regional conference that Beijing hosted, and they’ve met twice since.
North Korea was on the agenda at yesterday’s three-way meeting. Pyongyang’s nuclear bomb and missile programs have long posed a serious security worry for Seoul and Tokyo. China is North Korea’s only major ally and biggest aid benefactor, but has shown signs that it’s increasingly fed up with the North’s repeated provocations.
Park told Li that she wants China to continue to play a constructive role on North Korea issues, while Li called for more patience to continue efforts to achieve a nuclear-free Korean Peninsula, according to Park’s office.
The joint statement yesterday said the three leaders would push to resume “meaningful” North Korean nuclear disarmament talks at an early date and reaffirmed their opposition to the development of nuclear weapons on the Korean Peninsula. Hyung-Jin Kim, Seoul, AP