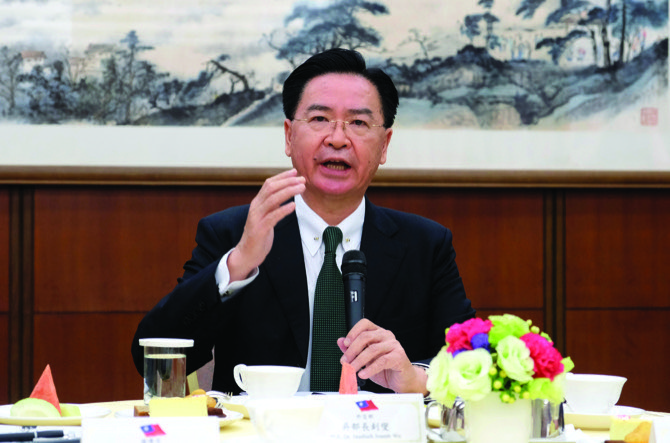 Washington should be concerned for strategic reasons that Taiwan is losing its diplomatic allies in Latin America to rival China, Taiwan’s foreign minister said yesterday.

Taiwanese Foreign Minister Joseph Wu seemed to imply that Washington could use its influence to help Taiwan hang on to its remaining Latin American allies.

“I think this is a gradual realization that this is what China is doing and there is realization in the U.S. administration that they need to work with Taiwan, which is going to be cooperation between Taiwan and the United States,” Wu told reporters.

“It’s going to be in our bilateral interest and it’s also going to be U.S. strategic interest,” he said.

Wu’s comments came a day after El Salvador President-elect Nayib Bukele said he has not decided whether to continue relations with China and accused Beijing of not being respectful to his country.

El Salvador switched ties from Taiwan to China in August, in a blow to Taiwan’s Latin American diplomacy. Washington recalled its ambassador to El Salvador in response in an indication of its concern over what appeared to be a trend of former Taiwanese allies abandoning the island.

China, which claims Taiwan as its own territory, has successfully poached five of Taiwan’s remaining allies since the election in 2016 of Taiwanese independence-leaning President Tsai Ing- wen. Critics have accused Beijing of using financial inducements such as lines of credit to sweeten such deals, something the government denies.

“Establishing ties is in line with the interests of both countries, and is completely above-board. These are no backstage dealings,” Lu said. “El Salvador is a sovereign nation and we believe that it is fully capable of making independent and correct choices that are in line with the trend of the times and in its own interests.” AP