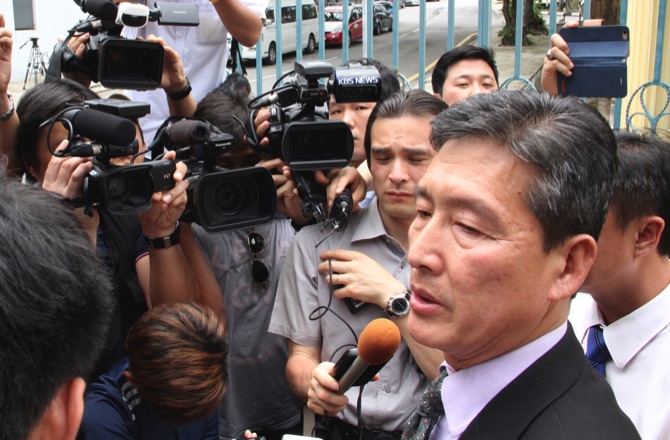 A high-level North Korean delegation arrived in Kuala Lumpur yesterday seeking the body of leader Kim Jong Un’s half brother, the victim of a nerve-agent attack that many suspect the North itself of orchestrating.

The body of Kim Jong Nam, killed Feb. 13 at Kuala Lumpur’s airport, is at the center of a heated diplomatic battle between North Korea and Malaysia.

North Korea opposed Malaysian officials even conducting an autopsy, while Malaysia has resisted giving up the body without getting DNA samples and confirmation from next of kin.

The delegation includes Ri Tong Il, a former North Korean deputy ambassador to the United Nations, who told reporters Tuesday outside the North Korean Embassy that the diplomats were in Malaysia to retrieve the body and seek the release of a North Korean arrested in the case. He said the delegation also wants “development of the friendly relationship” between North Korea and Malaysia.

Malaysia has confirmed that the victim of the attack was Kim Jong Nam. North Korea, however, has identified the victim only as a North Korean national with a diplomatic passport.

The killing of Kim Jong Nam took place amid crowds of travelers at Kuala Lumpur’s airport and appeared to be a well-planned hit. Malaysian authorities say North Koreans put the deadly nerve agent VX on the hands of two women who then placed the toxin on Kim’s face. Kim died on the way to a hospital, within about 20 minutes of the attack, they say.

Malaysian Attorney General Mohamed Apandi Ali said yesterday in a text message to The Associated Press that the two women accused of killing Kim Jong Nam — Indonesian Siti Aisyah and Vietnamese Doan Thi Huong — will be charged with murder todayday and would face a mandatory death sentence if convicted. Both women have been arrested, and authorities must file charges by today or release them. AP

A senior North Korean diplomat arrived in Beijing yesterday for talks following China’s ban on coal imports from its neighbor [more on page 10] and the killing of the exiled half brother of Kim Jong Un. Vice Foreign Minister Ri Kil Song will hold talks with Chinese Foreign Minister Wang Yi on “issues of common concern,” Chinese foreign ministry spokesman Geng Shuang said at a daily news briefing. Last week, China suspended all coal imports from North Korea for the rest of the year as it steps up pressure on its once-close Communist ally to give up its nuclear and ballistic missile programs.