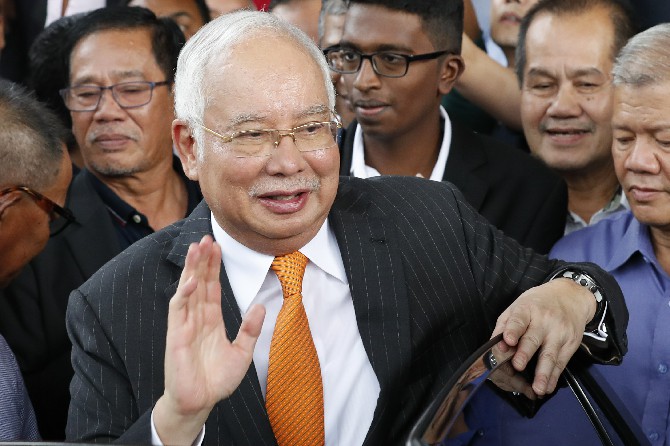 Thailand’s disbanded opposition Future Forward Party attacked the government yesterday for allegedly colluding with Malaysia’s former prime minister to cover up the 1MDB financial scandal, for which former Malaysian leader Najib Razak is now standing trial.
The accusation comes a day ahead of today’s launch of a no-confidence debate in the Thai parliament against Prime Minister Prayuth Chan-ocha and five other Cabinet members.
The Future Forward Party, which won the third highest number of seats in last March’s general election, was dissolved Friday by Thailand’s Constitutional Court for violating election laws by accepting a large loan from its leader, auto-parts billionaire Thanathorn Juangroongruangkit. Eleven party executives were kicked out of parliament immediately and banned from political office for 10 years, but the party’s remaining 65 lawmakers can keep their seats if they join another party within 60 days.
Party spokeswoman Pannika Wanich said at a news conference that because she was one of the lawmakers who lost their seats, she was presenting the case the party had prepared about the 1MDB scandal outside of parliament.
Government spokeswoman Narumon Pinyosinwat said the government was not involved in the case. “What Pannika said is groundless and vaguely connected,” she said.
The alleged mastermind behind the 1MDB scandal is fugitive Malaysian financier Low Taek Jho, better known as Jho Low, who is believed to be hiding out in China.
Pannika’s assertions are generally known and break no new ground. However, all have previously been treated as sideshows to the case, and this is the first major effort to spotlight any involvement by Thailand.
She said that Jho Low had freely visited Thailand five times in 2016-2018 even though an Interpol “Red Notice” requested by Singapore seeking his arrest had been issued. China has also been widely reported to have allowed him entry during this period, when Najib was still in power. His party lost a May 2018 general election.
“The Red Notice of Jho Low, it was shocking that Thailand ignored Interpol’s Red Notice. And the only two countries who did, who do that continuously, are China and Thailand,” said Pannika. “And who are we? China is China but we are Thai. So this is unacceptable. We need a more responsible government.”
The events she referred to all seem to have taken place before the current government under Prayuth took office last year. However, Prayuth also served as prime minister in the military government that held power before that, after staging a 2014 coup ousting an elected government.
Prayuth will be the main target of the opposition, which is expected to attack his leadership in facing economic troubles, as well as a serious air pollution problem and the health threat from the new virus that first emerged in China. MDT/AP