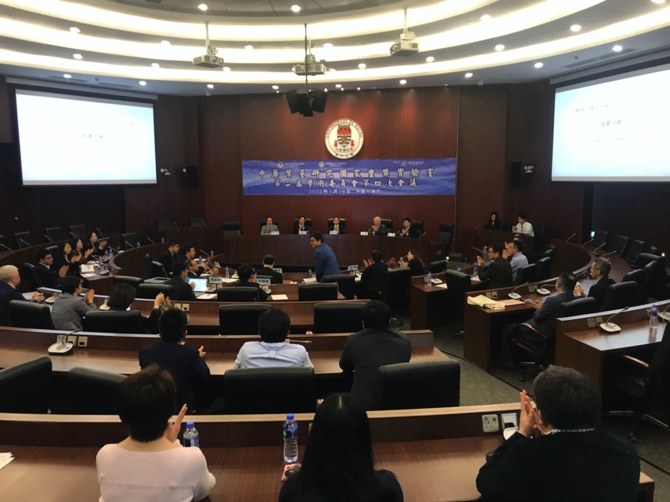 Yesterday, the State Key Laboratory of Quality Research in Traditional Chinese Medicine held its fourth meeting of the Second Academic Committee. On the sidelines of the meeting, associate professor Wang Chunming shared the laboratory’s recent achievements and offered some comments on Chinese medicine.

Talking from the perspective of a scholar, Wang indicated that for those with doubts or preconceived notions about Chinese medicine, they must approach it with evidential support. Having first been trained in chemistry research, Wang later directed his efforts to Chinese medicine research. He has discovered “beautiful findings” from the field.

“That means that we should focus on evidence,” Wang voiced. “As a scholar, I would suggest that we should not be too quick to judge. We should try to understand something.”

In Wang’s opinion, there is “no modern medicine or traditional medicine,” only different ways of understanding the world.

The scholar also believes that there is stronger and clearer evidence to suggest that Chinese medicine is “very important” to the world.

Commenting on the laboratory, Wang said that it has gathered researchers from across the world.

“We are the first lab across the two universities,” said Wang, referring to the Macau University of Science and Technology and the University of Macau. According to Wang, this has meant ample resources and an excellent research output in Chinese medicine research.

Talking about the laboratory’s future development, Wang hopes that it can take advantage of Macau’s unique position to work as an innovative laboratory. The laboratory is also expected to contribute to Macau’s economic diversification, as both the local government and the central government require Macau to be involved in technological innovation.

Wang, who is also the Programme Director at the laboratory, remarked that “if there are ways that universities, hospitals, government and companies can find to cooperate [in terms of Chinese medicine], it would be very exciting.”

Cheang Kun Wai, member of the Administrative Committee of the Science and Technology Development Fund (FDCT) said during the meeting that, within 15 years, the FDCT has granted a total of 1.4 billion patacas to academic research institutions. Chinese medicine and medical biotechnology are two of the most important fields for FDCT sponsors.