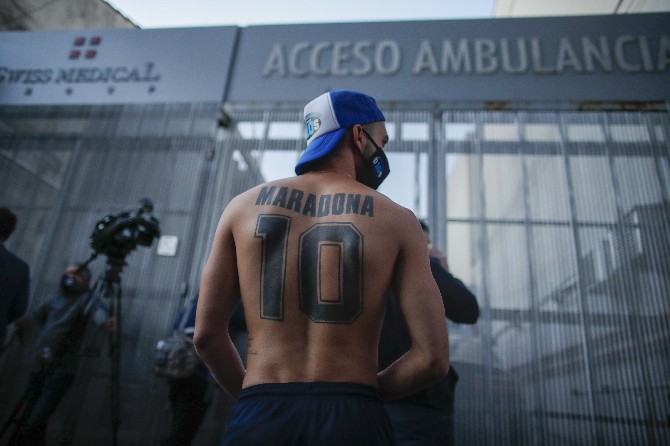 Diego Maradona’s psychologist Diego Díaz says the Argentine soccer hero is in a stable condition in a private health clinic where he is recovering from surgery.
Maradona last week had an operation for a subdural hematoma, which is an accumulation of blood between a membrane and his brain.
His personal doctor, neurologist Leopoldo Luque, said the problem likely was caused by an accident, but the 60-year-old Maradona said he didn’t remember the event.
Díaz, who is taking care of Maradona during his time at the Olivos private clinic, on Tuesday said the 1986 World Cup champion needs doctors, therapy and “fundamentally family support.”
He said Maradona’s status as a national sporting hero in Argentina didn’t preclude him from experiencing the same health issues as other people.
“Diego Maradona, in certain issues, is just like everyone else … with the same limitations, difficulties and advantages that any human being has,” Díaz told The Associated Press in an interview. “The important thing today is that he is stabilized, that he is controlled in terms of pharmacological management, the levels of food and rest.
“And then he will be able to continue with a system according to a patient like Diego Maradona. This has to do with the presence of therapeutic companions, nurses, an interdisciplinary team and, fundamentally, his family.”
Dr. Luque told radio La Red earlier Tuesday that Maradona will be transferred to a house in the north of Buenos Aires, close to his older daughters Dalma and Giannina. That means he will not be able to coach first-division team Gimnasia y Esgrima for now.
“He is a patient that lives in extremes,” Luque said, adding that Maradona could put an end to stresses that were potentially harmful to his health, but the former Boca Juniors, Barcelona and Napoli star is convinced he needs to keep working.
Luque said Maradona, who has had addiction problems in the past, has lowered his alcohol intake but even small amounts could have negative affects in combination with the medication he needs for his recovery.
Maradona turned 60 on Oct. 30 and showed up that night for Gimnasia’s national championship match against Patronato, which his team won 3-0. He left before the end of the first half, which raised questions about his health.
He was initially admitted to another clinic in La Plata with signs of depression, anemia and dehydration, before being moved when the subdural hematoma was discovered. DEBORA REY, BUENOS AIRES, AP