DRIVE IN | A sober diplomacy drama in ‘Sergio’ 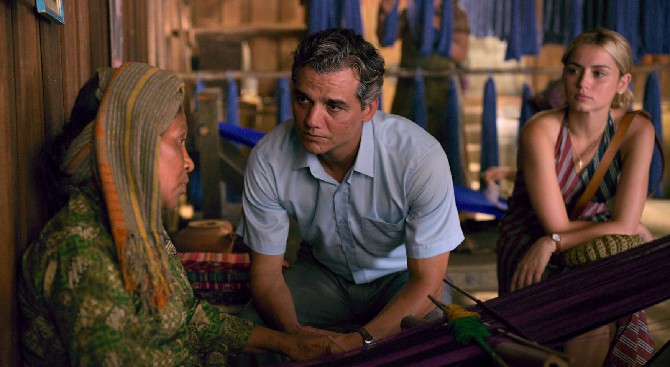 The United Nations diplomat Sérgio Vieira de Mello has been described as a cross between James Bond and Bobby Kennedy, which sounds like a compelling enough pitch for a film on its own.
The Brazilian-born de Mello spent 34 years at the U.N. during which he was involved in clearing land mines in Cambodia, leading East Timor to independence from Indonesia and serving as a U.N. Special Representative in Iraq in 2003 at the time of the Canal Hotel bombing. He was even considered a likely successor to Secretary-General Kofi Annan.
But you’d be forgiven for drawing a blank at the mention of his name. Filmmaker Greg Barker even called him “the most important guy you’ve never heard of.” His fascination with the charismatic diplomat has spanned more than a decade and been the subject of two films: A short documentary and a fictionalized feature-length drama starring Wagner Moura and Ana de Armas that hits Netflix Friday.
“Sergio” the feature is a handsome-looking, serious and solidly adult geopolitical drama that neither talks down to uninformed viewers nor requires a master’s degree to understand. It begins intriguingly enough, as de Mello (Moura) arrives in Baghdad and immediately starts clashing with the United States’ Paul Bremer (Bradley Whitford) over objectives.
De Mello empathizes with the Iraqis and wonders how he would feel seeing foreign troops on the streets of his hometown of Rio de Janeiro (not good). Bremer, however, believes that the U.N. is there at the pleasure of the U.S., talking about liberation and independence while doing what appears to be the exact opposite.
But de Mello is no shrinking violet and knows that he’s there as an independent entity and isn’t afraid to say so to the press. It’s all rather exciting, although the 20-20 hindsight feels a little oversimplified. The escalation continues and de Mello has decided to expose all the human rights violations of the U.S. to the security council when things come to a sudden halt: A bomb goes off and he wakes up pinned under a pile of rubble.
The script, from “Dallas Buyers Club” co-writer Craig Borten, tells the story from there as a series of flashbacks to his time in East Timor, a pivotal moment in his career and life when he meets de Armas’ Carolina Larriera, interspersed with the aftermath of the Baghdad bombing as soldiers scramble to save de Mello and refugee expert Gil Loescher (Brian F. O’Byrne).
There’s a natural engine to the narrative and the movie star charisma of de Armas and Moura, along with their palpable chemistry, helps drive interest for a while.
But you’re always waiting for the movie to really get going.
The situation in Baghdad, even before the bombing, could have provided more than enough drama to sustain a feature. But “Sergio” wants to be more sweeping than that — romantic, dramatic and political — and we’re left with something that never exactly reaches the full promise of “James Bond meets Bobby Kennedy.”
It’s not that “Sergio” is bad — far from it — but it’s not necessarily going to keep you glued to the screen either.

“Sergio,” a Netflix release, is rated R by the Motion Picture Association of America for “language, some bloody images and a scene of sexuality.” Running time: 118 minutes. LINDSEY BAHR, AP Film Writer