Drive In | ‘Beastie Boys Story’ isn’t a sure shot, but it’ll do 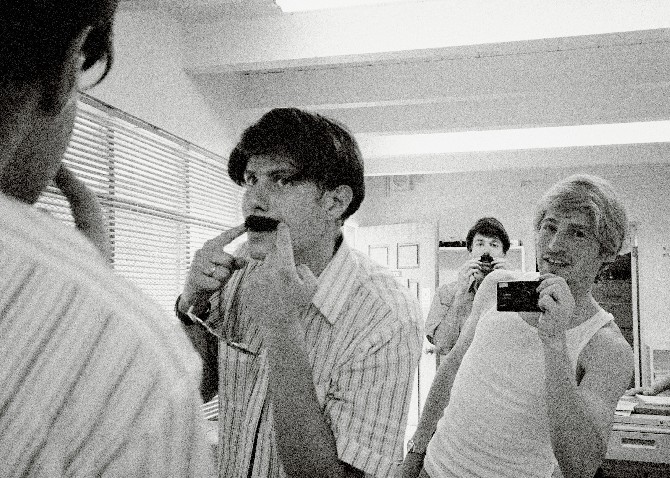 A scene from the documentary “Beastie Boys Story,” about the iconic New York City group, which debuted last week on Apple TV Plus

Little was predictable about the Beastie Boys in their three-plus decades of making music. They were spontaneous, always evolving, off-the-cuff pranksters who turned pro without ever losing the punchline.
Even seeing ahead to the end of a rhyme was impossible. Their lyrics took circuitous, hysterical routes. “I’ll stir fry you in my wok/Your knees’ll start shakin’ and your fingers pop/Like a pinch on the neck of Mr. Spock.”
So why is “Beastie Boys Story,” a documentary of Mike Diamond and Adam Horowitz’s staged show, so predictable? “Beastie Boys Story,” which arrives Friday on Apple TV-Plus, is billed as a “live documentary experience.” And with Spike Jonze, who so memorably directed the Beastie Boys’ “Sabotage” music video presiding over both the theater show and the film, one could reasonably expect — whatever “live documentary” means — something alive. Maybe even something “off the hook like Latrell Sprewell” or popping “like a pinch on the neck of Mr. Spock.”
And yet, “Beastie Boys Story,” while often rollicking and moving, frequently has the stale air of a Ted Talk, as Horowitz and Diamond calmly walk the stage, read teleprompters from stools, pause for frequent video inserts and chronologically tell the story of their unlikely rise from downtown New York to hip-hop elite.
“Beastie Boys Story” was a touring stage show that Horowitz (Ad-Rock) and Diamond (Mike D) performed following the 2018 publication of their massive memoir-scrapbook “Beastie Boys Book.” Over their three-night stand last year at Brooklyn’s Kings Theater, Jonze documented it. Occasionally, he’s heard (but not seen) interjecting from the booth.
Those few moments, along with a handful of other sly riffs (a montage of their hard-working “Check Your Head” club tour is scored to Dolly Parton’s “9 to 5”) supply some of the deconstruction you’d expect from the Beasties and Jonze. But, really, much of this isn’t so different than “Springsteen on Broadway,” only with more interjections of “No joke!” and “That’s crazy!”
But one of the richest threads of the Beasties’ story is how they were so often propelled by improvisation and goofing off. Their sophomore album, “Paul’s Boutique,” was a mash-up masterpiece of endless sampling and style mixing. When they rented a Hollywood house owned by Marilyn Grasshoff, her ‘70s wardrobe became their treasure-trove of props. “Sabotage,” they filmed without permits or much planning. At their best, they just went out and made stuff, pulling from a wide spectrum of sources and whatever was around them.
“Beastie Boys Story,” though, is polished legacy burnishing that doesn’t quite suit the rappers of “So What’cha Want” let alone “(You Gotta) Fight for Your Right (To Party).” At times, it feels perilously close to the rough draft of a jukebox musical to come.
But if the framework is less inspired, the story remains grand. Their arc is a spectacular one, starting as a wannabe punk band (“We were Monty Python as much as we were Black Flag,” one recalls); being molded by Russell Simmons into a cheap MTV act; picking up instruments and taking control of their musical destiny; turning from party anthems to socially conscious activism.
It’s a journey not so unlike The Beatles or The Who, starting as a novelty act and turning artistically adventurous. “It’s not so much that we grew up. We wised up,” says Horowitz.
But where the Beastie Boys differed most from the standard music-stardom cliche is in how tight they remained, brothers to the last — a perpetual three-man weave with the comic timing of Moe, Larry and Curly. And it’s in the heartfelt remembrances of Adam Yauch, the band’s musical and spiritual leader, that “Beastie Boys Story” breaks into sometime more authentic and memorable. Even the deficiencies of the movie become a kind of tribute. Early on Mike D says it simply: “The two of us will do the best we can because one of us isn’t here.”

“Beastie Boys Story,” an Apple TV Plus release, is unrated by the Motion Picture Association of America. Running time: 119 minutes. Two and a half stars out of four. JAKE COYLE, AP Film Writer