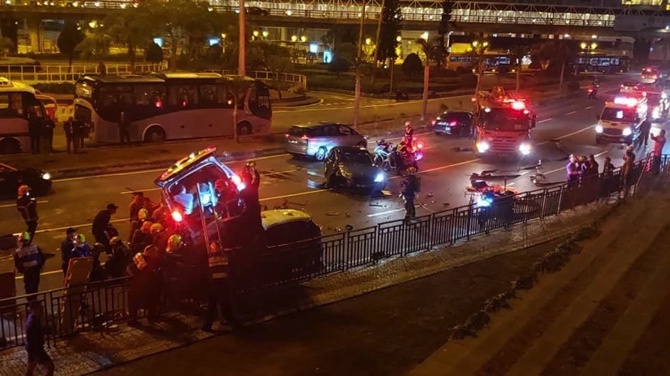 Four people were injured in a car crash in Coloane yesterday.

The accident took place on Estr. de Cheoc Van, on the side closer to Hac Sa Beach.

At 3 a.m. yesterday, a private car crashed into a hillside, injuring the driver and his three passengers. The vehicle then bounced back onto the road and the safety airbags deployed. The front of the car, including the hood and the bumper, were severely damaged.

The alleged driver refused to go to hospital. His breath test indicated he had a blood alcohol concentration (BAC) of 1.3 mg/L above the limit of 0.5 mg/L.

This was the second notable car accident recorded this week.

On Monday night (December 30), three cars collided and eight people were injured due to one drunk driver, while one passenger was unharmed.

The accident took place at Avenida de Amizade near Oceanus at Jai Alai. The driver who caused the accident was under the effects of alcohol and had a BAC of 1.2 mg/L. The police authority temporarily closed off the relevant sections of the road to traffic.

The passengers inside the seven-seater were trapped until firefighters rescued them.

The accident involved three drivers and six passengers in total. Seven men and one woman were taken to the hospital due to their injuries, but all were in stable condition. One passenger was unharmed by the accident.

The driver who caused the accident had no passengers with him at the time.