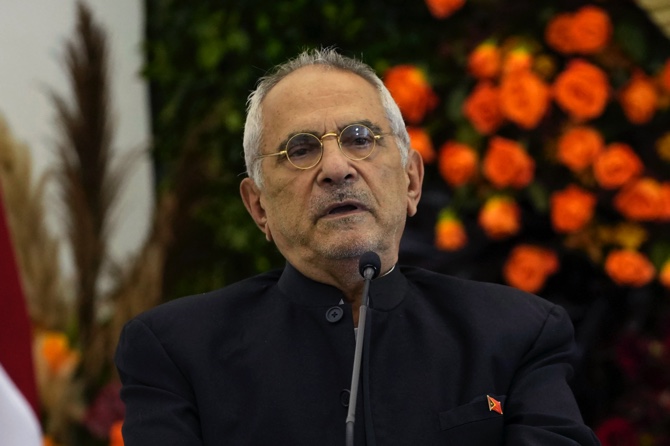 East Timor’s President Jose Ramos-Horta is scheduled to arrive in Australia yesterday for a state visit as negotiations over lucrative gas resources reach a critical stage for his impoverished nation.

The East Timorese are gaining confidence that they can break a 20-year deadlock with the new Australian government over the development of Greater Sunrise, an estimated $50 billion in gas that lies beneath the seabed that separates the two countries.

Australia wants the gas to be piped to an existing liquefied natural gas export hub at its northern city of Darwin. East Timor expects more economic benefit for the half-island nation of 1.5 million people if Greater Sunrise energy is piped to the East Timorese south coast.

Australia and East Timor currently share revenue from the Bayu-Undan gas field in the Timor Sea that has been piped to Darwin since 2006. But that field is expected to run dry this year.

Without further oil and gas revenue, East Timor’s $19 billion sovereign wealth fund could be spent within a decade, according to La’o Hamutuk, an East Timorese research institute.

Ramos-Horta, who shared the Nobel Peace Prize in 1996 with East Timorese Bishop Carlos Belo for their efforts to end conflict in their homeland, has suggested approaching new potential partners including China to finance an East Timor LNG plant.

Ramos-Horta has also suggested the Japanese, South Koreans and Indonesians as potential partners.

Prime Minister Anthony Albanese described Ramos-Horta’s visit that ends Sunday as an opportunity to deepen the two countries’ relationship, as well as to explore avenues for strengthened cooperation both bilaterally and in the region.

“The big blocking point is whether it goes to Darwin or the south coast of Timor,” Leach said yesterday.

A joint venture partner in Greater Sunrise, Australian company Woodside Energy, has raised technical concerns about piping the gas to East Timor. While the gas field is much closer to East Timor than to the Australian coast, the route to Darwin is through much shallower water.

The other partners are East Timorese state-owned company Timor Gap, which holds a 56% stake, and Japanese company Osaka Gas, which holds 34%.

Woodside said its current focus was on finalizing a production sharing contract for Greater Sunrise.

“Woodside remains committed to the development of Greater Sunrise provided there is fiscal and regulatory certainty necessary for a commercially viable development to proceed,” the company said in a statement.

“We understand and respect Timor-Leste’s desire to process Sunrise gas in Timor-Leste, however, any development plan will need to be assessed against the criteria established” in a maritime boundary treaty signed between Australia and East Timor in 2018.

Under the treaty, East Timor would receive 80% of the Greater Sunrise revenue if the gas is piped to Darwin and 70% if it is piped to an East Timorese plant.

The treaty also gives Australia power to veto any partner that East Timor might choose.

During a visit to the East Timorese capital Dili last week, Foreign Minister Penny Wong warned the nation against going into “unsustainable debt” to the Chinese in building a new gas hub.

Saul Kavonic, an energy analyst for Swiss-based investment bank Credit Suisse, said the industry’s view was that an East Timorese LNG plant was not commercially viable.

Trusting the Chinese to develop the technology would be a “very big bet,” Kavonic said.

“Timor would essentially be betting its entire economy on a project being built by a company, for example from China, who has no experience in doing this and that would be an exceptionally risky proposition for them,” Kavonic told Australian Broadcasting Corp.

Greater Sunrise has been a source of friction between the neighbors since 2002 when East Timor became independent of Indonesia.

A treaty signed in 2006 was canceled when East Timor accused an Australian spy agency of bugging government offices in Dili in 2004 to give Australian negotiators an unfair advantage.

Australia’s new government, elected in May, pleased East Timor in July by dropping the 4-year-old prosecution of lawyer Bernard Collaery who was accused of attempting to prove the spying.

The U.N. estimates that nearly half of East Timor’s population lives below the extreme poverty line of $1.90 a day and half of children younger than 5 suffer physical and mental stunting as a result of malnutrition. ROD McGUIRK, CANBERRA, MDT/AP