Ebola | Nigeria virus free as WHO says outbreak can be contained 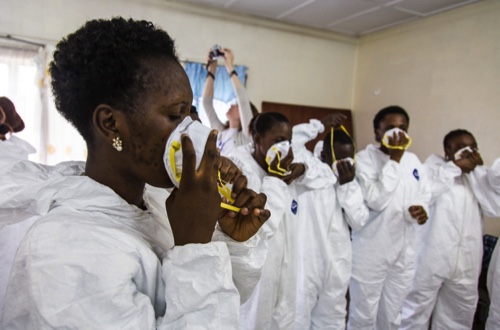 Nurses are trained to use Ebola protective gear by WHO workers, in Freetown, Sierra Leone

The World Health Organization declared Nigeria Ebola-free after the disease killed seven people in Africa’s most populous country.
“The outbreak in Nigeria has been defeated,” Rui Vaz, WHO’s country representative for Nigeria, told reporters today in Abuja, the capital. “This is a spectacular success story that shows the world that Ebola can be contained.”
Liberian-American Patrick Sawyer introduced the virus to Nigeria in July when he arrived on a flight to Lagos, the country’s biggest city with an estimated 20 million people. Sawyer, five health workers and the protocol officer who received him at the airport, died of Ebola, according to Nigeria’s health ministry.
A key reason for Nigeria’s success was that all agencies involved in the anti-Ebola effort worked together, Health Minister Onyebuchi Chukwu told reporters in Abuja. “This is one factor we believe may be lacking in the control efforts of other countries,” he said.
Nigerian officials said they were expecting the declaration 42 days after the last contact was cleared in early September. They led a two-month campaign during which contact tracers made 18,500 home visits to more than 800 people who came into contact with infected persons in Lagos and the southeastern oil center of Port Harcourt. Africa’s biggest economy with more than 170 million people recorded 19 cases.
The current outbreak in Liberia, Sierra Leone and Guinea has infected about 9,000 people and killed nearly 5,000, the WHO said on Oct. 15. Another man who traveled from Liberia, the worst-hit nation, to Dallas, Texas, and died from the virus while in isolation at a hospital. His case was the first Ebola infection confirmed in the U.S.
“One of the key things that worked for Nigeria was the fact that we knew the index case and we were able to trace all the contacts back to him,” Tom Aba, the senior data manager at the Ebola Emergency Operation Center, said in Sept. 30 phone interview from Lagos.
Nigerian and WHO officials say the country remains at risk while the outbreak of the virus is yet to be brought under control in West Africa.
“Nigeria’s geographical position and extensive borders make the country vulnerable to additional imported cases,” WHO’s Vaz said.
Nigeria still needs “to maintain a state of high alertness at points of entry,” Chukwu, the health minister, said. Daniel Magnowski and Yinka Ibukun , Bloomberg