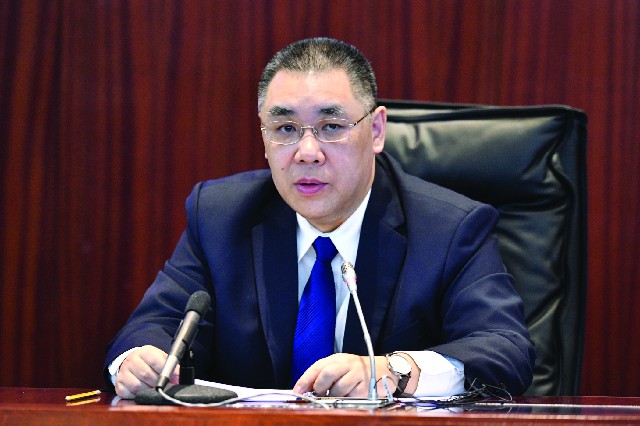 Chief Executive Chui Sai On has pledged that the government will monitor the Macau SAR’s current economic situation and prepare any intervention needed to maintain the stability of the economy as a precaution. In doing so, Chui became the second senior official in the SAR to state that economic intervention might be necessary.
Earlier this month, Secretary for Economy and Finance Lionel Leong said that Macau’s recession period would continue into the third quarter. He also suggested the government could intervene if necessary.
During the 2019 Economic Development Council plenary meeting last week, the CE said that Macau’s economic performance in the second half of 2019 was likely to face downward pressure because of the volatile international economic situation and the increasing uncertainties in the global economy.
According to data released by the Statistics and Census Service late last month, the economy contracted by 1.8% year-on-year in the second quarter of 2019, following a 3.2% contraction in the first quarter. For the first six months of the year, Macau’s economy was down by 2.5% in real terms compared to last year.
Researchers at the University of Macau last week released their Macroeconomic Forecast for Macau 2019-2020, projecting that the city’s gross domestic product will decline by 0.8% across the whole of 2019, and contract 0.9% in 2020.
However, Chui reassured the public, saying that the government would make an effort to ensure the city’s economic development was maintained, as cited in a statement issued by the Government Information Bureau.
During the meeting, representatives from the Economic Development Council’s three task groups, which are focused on economic diversification, human resources and regional economic development respectively, presented reports on work that had been conducted over the past year.
According to Leong, who was at the meeting, the SAR had seen an “enhancement of its resilience and capabilities in relation to coping with adversity.”
Leong noted that this was judged by its stable employment figures, public finances, development in certain emerging industries, and the advancement of efforts regarding the city’s economic diversification.
The official then said that the government would speed up efforts to initiate large-scale public projects to prevent the economy from slowing down.
Previously, Leong had also expressed his concerns regarding a drop in the gross domestic product in the casino sector. Gross gaming revenue in the SAR dropped 8.6% year-on-year in August and 3.5% in July.
However, Leong believes that the fluctuation was the result of external incidents and factors, including the U.S.-China trade war, with the Renminbi exchange rates affecting the SAR.
Previously, the International Monetary Fund had warned that the Macau economy was facing several medium-term risks, including the diminishing spending power of mainland tourists. LV