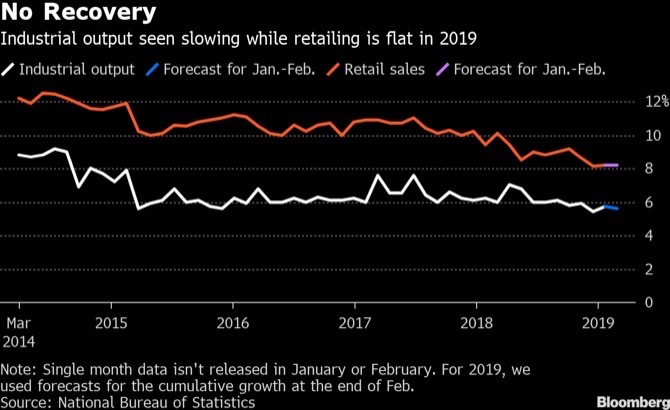 China’s first batch of major official indicators this year are forecast to show that an investment recovery that began in mid-2018 is set to continue, but the economic slowdown and trade war are still undermining factory output and consumption.

Official releases due today will show that measures since last year to boost infrastructure constructions have probably started having an effect, with a slight strengthening seen in investment.

However industrial output growth is forecast to have slowed in the first two months of this year versus the December pace, while retail sales remained stable, according to economists surveyed by Bloomberg.

The data will be released during the final days of the annual national legislature meeting, at which the government lowered its growth target, unveiled a record amount of tax cuts, increased support for smaller firms and also reiterated that a debt-fueled investment boom is not on agenda.

There was no January data as the National Bureau of Statistics combines readings for the first two months of each year to smooth out volatility from the Lunar New Year holiday, when factories and businesses across the country shut down.

“Investors will have a better idea on the economy in 2019” after the release, Larry Hu, head of China economics at Macquarie Securities Ltd. in Hong Kong, wrote in a note. “It’s too early for policy makers to escalate stimulus at this stage.”

Here’s what today’s data will show, according to those surveyed:

Industrial output rose 5.6 percent from a year earlier in the first two months, versus 5.7 percent in December. Retail sales expanded 8.2 percent, unchanged from December’s growth. Fixed-asset investment in urban areas rose 6.1 percent from a year earlier, higher than the 5.9 percent pace in the whole of 2018. The jobless rate, which hovered around 5 percent in 2018, will also be released.

The nation’s economic growth is in a long-term slowdown and is forecast to expand 6.2 percent this year, after 6.6 percent growth the previous year. That’s within the government’s target range of 6 to 6.5 percent. The trade war and a global slowdown have hit trade performance, with exports dropping almost 5 percent in the first two months from the same period last year, and shipments to the U.S. down almost 15 percent over the same period.

There’s signs that the two nations are making progress on a deal but still no certainty for companies about if or when tariffs might be lifted. While top negotiators discussed key questions over wording of trade documents and arranged for the next stage of talks in a Tuesday call, later in the day U.S. Trade Representative Robert Lighthizer declined to say whether the administration would roll back U.S. tariffs if a deal was reached.

Even so, bets on a positive outcome have fueled investor sentiment, with the yuan now Asia’s second best-performing currency this year and the benchmark Shanghai Composite Index up more than 20 percent this year.

That market confidence was the main factor in the pickup seen in Bloomberg Economics’ aggregated reading of early indicators, although the official purchasing manager gauge of factories contracted further in February. Bloomberg