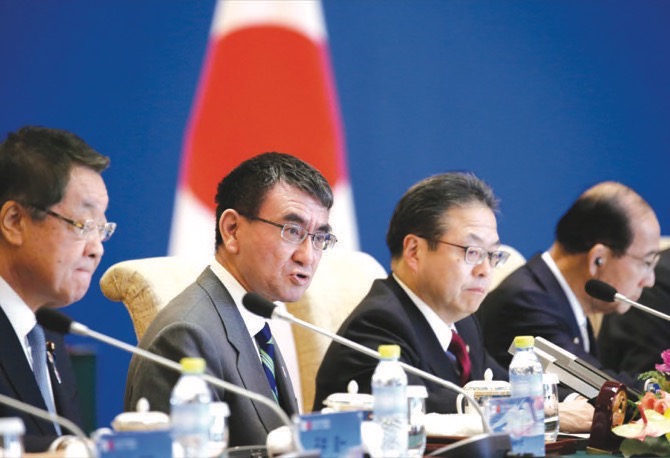 China and Japan have the opportunity to “take charge of the economic field” during a time of worldwide uncertainty, Japan’s foreign minister said Sunday, as trade pressures from the United States have prompted both countries to seek alternative markets.

Foreign Minister Taro Kono met with his Chinese counterpart, Wang Yi, in Beijing to discuss youth exchanges and economic relations between the two countries, whose ties “completely recovered” last year, according to Kono.

The relationship was turbulent in previous years due to an unresolved dispute over islands in the East China Sea. High-level exchanges were frozen in 2012 after Japan nationalized the small group of remote islands claimed by Beijing. The act set off violent protests in China and sent Japanese investment and tourism into a nose dive.

Trade and investment have since rebounded, and companies from the two nations are considering joint projects in third countries such as Thailand.

While “the current economic situation is complicated and profoundly changing,” Wang said, “Sino-Japanese economic cooperation is constantly advancing at a solid pace.”

China and the U.S. said a week earlier that they achieved new progress in talks aimed at ending a tariff standoff over Beijing’s industrial and technology policies. A conclusion to the dispute, which has shaken financial markets, remains uncertain.

Meanwhile, Japan’s exports have suffered as a result of slowing Chinese growth. China is Japan’s largest trading partner, and Japanese companies — from carmakers to department stores — play a major role in the Chinese economy.

President Donald Trump has also imposed tariffs on imported steel and aluminum from Japan, and threatened automobile tariffs that would leave Japan among the hardest-hit.