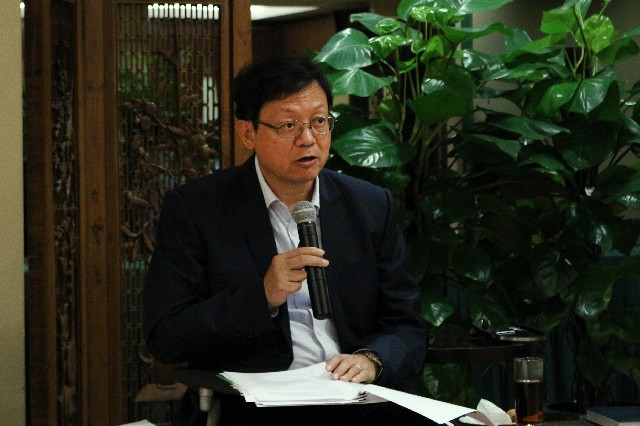 The Education and Youth Affairs Bureau (DSEJ) aims to develop “critical thinking” in local schools and is against the idea of teachers bringing any “ideology” into schools, DSEJ director Lou Pak Sang told media late last week at a gathering organized by the bureau.
In the bureau’s reply to a question about local schools discussing the situation in Hong Kong, Lou said, “we want to develop the critical thinking [in schools]. Our idea is that teachers would teach students to think in different ways and not just follow the teacher’s ideology.”
“We don’t want the teachers to teach any particular political position or view to the students [but instead] all topics should be addressed and analyzed.”
Lou also noted that the guidelines the DSEJ had distributed to schools before the school year started were not specifically related to the current situation in Hong Kong, but instead applied to all situations in a broader sense, mentioning, “schools have pedagogical autonomy.”
When questioned by the media about the content of the guidelines, Lou said, “we did not request [that] the principals to stop any kind of protests, but we did note that students should avoid going to crowded places for safety reasons. We never noted the word protests.”
“If students have doubts and present questions to teachers in the classroom, the teachers should present the facts in a fair and impartial manner,” the director added.
The DSEJ director said that the instructions were aimed at avoiding clashes, exchanges or arguments between students, which could escalate and result in more cases of bullying. “We want the students to be able to express their views in a safe manner,” Lou concluded.

Bullying remedied with karaoke songs
Questioned by the Times on school bullying and the results of the latest assessment by the Programme for International Student Assessment (PISA), the director of the DSEJ said that the bureau had been working on this topic and that the outcomes of the PISA assessment placed Macau with the fourth highest incidence of school bullying worldwide.
According to Lou, the DSEJ has created a task force to address the problem and provide teachers with the necessary training to combat bullying in schools.
“We have focused mostly on teaching the teachers how to deal with cases [of bullying],” Lou explained.
The DSEJ had also created a specific karaoke song which, according to the official, is being taught to students in all schools.
Questioned on the expected outcomes of the measures, the director said, “we believe that the environment of harmony [in schools] will improve. For the next assessment results, we hope to have an improvement, but if we don’t see one, we will study more new measures to improve the happiness of students.”

New rainstorm signals to be enforced
Another of the new measures DSEJ presented during their meeting with the press was the new rainstorm warning system.
According to Lou, a new system with three levels will replace the current system, which consists of one level only. It is hoped that the new system will improve the accuracy of information and the measures to follow.
The move is a return to the old system, which was replaced by the current signal in 2004. The current signal is enforced whenever rainfall over Macau is expected to be 50mm or more two hours after the signal is hoisted.
The new system includes warnings for 20mm, 50mm and 80mm.
The Meteorological and Geophysical Bureau (SMG) provided schools with a demonstration of the 20mm warning last week in preparation for the school year. Although this will act as a notification for now, according to Lou, the SMG is preparing to change the regulations on this topic.
Additionally, pedagogical materials for the subject “Education for Security,” which began being taught last year, were enforced this school year.
According to Lou, the new updates come as a result of studies and visits done by DSEJ staff to the mainland and Japan, with the latter being particularly relevant. “We know that Japan is important because it’s a country affected by many natural disasters, and also because due to their system, there is a low incidence of need for rescue operations in most of the cases, as the citizens are well aware, and they are taught how to secure themselves and also help others,” said Lou.
The study materials for this subject have already reached schools and are available in three languages, with the DSEJ director noting that the DSEJ will proceed with an annual review regarding further updates.
One of the upcoming updates, which will probably be announced next year, is the inclusion of procedures on how to act in case an intruder intent on harming students, teachers or staff members enters the school.
This is related to several recent attacks in schools worldwide, including China. Only last Monday, a man with a knife entered a Chinese primary school and killed eight children.