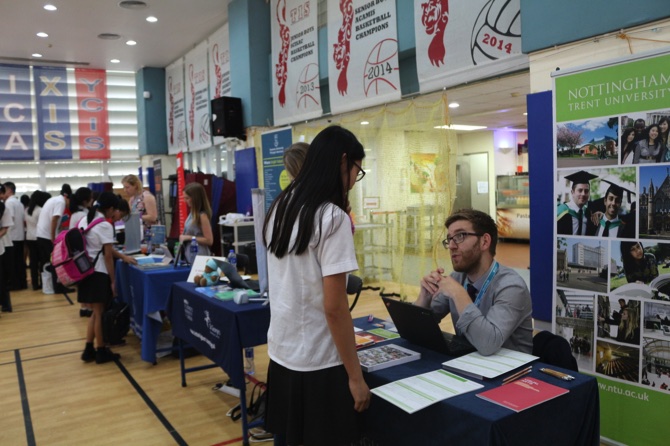 The International School of Macau held its sixth University Fair yesterday, in which 43 universities participated.
The annual event aims to provide students from TIS and surrounding high schools with information about degree programs, application processes and scholarship opportunities.
TIS Academic Counselors Jody Hubert and Dan d’Entremont told the Times it was expected the event would be attended by 450 students. In addition to TIS students, pupils  from the Macau Anglican College and the School of the Nations were in attendance, as well as from the Zhuhai International School.
“I think it’s good for students of all ages because it really shows them some different schools to think about,” Huber explained. “It gets the kids thinking and so it gives them a kick to get their applications done,” she added.
Dan d’Entremont explained that the majority of last year’s TIS graduates entered UK universities, thus most of the institutions in the fair are from the UK.
“If [you] look at our graduating class last year, a lot of them went to these universities here, who are now coming to recruit. So perhaps now that they’ve gotten some students from Macau, they’re coming to Macau hoping to get more students applying,” he said.
Meanwhile, several students said they believed the fair was an advantage to them, as some have no plans of pursuing their studies in the region.
Juliana Tavares, a TIS student who is planning to study law, explained that the fair has broadened her perspective on choosing an institution.
“I always have a fixed mindset on where I want to go but this really open[ed] my eyes. These opportunities […] kind of broaden your perspective and I think it’s really helpful,” she said.
Another graduating student, Sonia Mercedes, said she also plans to study law and would like to explore different cultures, hence she has no plans to continue her studies in Macau.
Some exhibitors said they received several enquiries from the visiting students across a range of ages. The fair does not only target graduating students, but also pupils who will graduate in two to three years.
University of Hull representative Dominic Greenfield stated that the most popular courses are engineering, psychology and sport science, adding that he thought the fair was a success with a good turnout.
The counselors said there are plans of inviting several more schools in the region to the fair, adding that they will make the fair larger in the future if space permits. 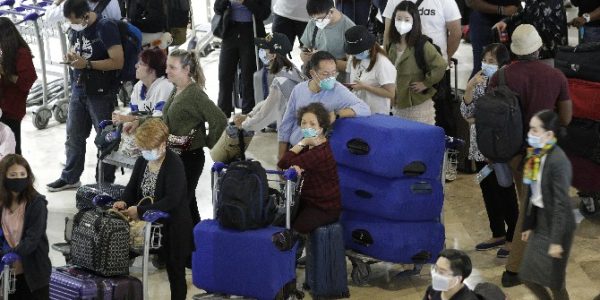