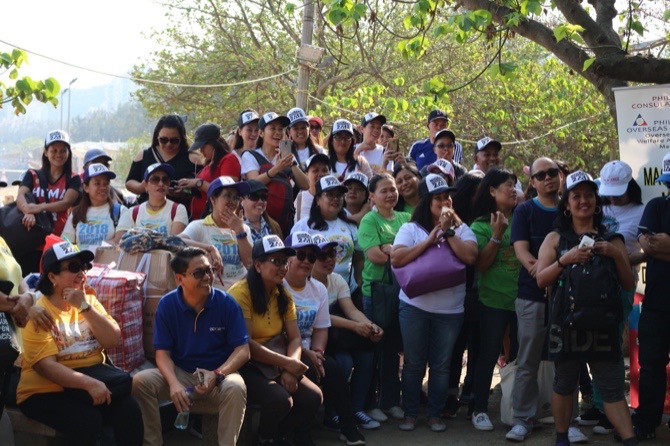 The eight days given to non- residents workers to find new employment once their work contracts are terminated is considered by many to be too short a period. But new legislation that seeks to prevent people from re-entering Macau as tourists in their search for work will create another hurdle for them.

The Times is aware of several cases in which non-resident workers, irrespective of how long they have been working in the SAR, were forced to travel back to their home country, as the eight-day visa was not a sufficient length of time to find another employer.

Many return home while waiting for a new employer’s quota to be approved or released by the Labour Affairs Bureau.

Some Filipino nationals prefer to go to either Thailand or Malaysia while waiting for a call regarding their job applications, because exiting the Philippines again is often difficult due to restrictions in the immigration processes.

Others make what is known as the ‘Zhuhai U-turn’, crossing the border into mainland China just before their work contract ends, which allows the issuance of a longer, tourist permit with which to re-enter Macau.

New legislation expected to be discussed at the Legislative Assembly tomorrow seeks to put an end to many of these work-arounds.

The price? According to representatives of non-resident worker communities, the legislation will leave some of the most vulnerable in Macau society even more exposed to abusive labor practices.

The six-month ban, under the existing Law for the Employment of Non-Resident Workers, also remains a significant issue for these non-resident workers. The ban can be applied to migrant workers who quit their jobs without finishing their contracts.

Yosa Wariyanti, the leader of the Indonesian Migrant Workers Union, said that many of her compatriots were issued a ban after finishing their contracts, denying them the chance to find a new employer for six months.

Jenelyn Blaza, a non-resident worker in Macau, was given a six- month ban when she decided to resign from working for her employer after encountering a series of misunderstandings.

The non-resident worker told the Times that she was given eight days to leave Macau and was not aware that she was facing the six-month ban. Blaza alleged that the ban had been requested by her employer.

“I only realized that I was issued a six-month ban when I was about to have my new working visa, as I had found a new employer,” said Blaza.

“It was my former employer who requested [for] immigration to issue me the ban. She wrote a statement and I brought it to immigration. Apparently, since my new employer backed off after finding out I was issued a ban, the ban was pushed through,” she said.

Although Blaza is now back in the region, she said it is a struggle for domestic workers to try to look for other jobs given the current laws for non-resident workers. She said they have no option other than to stay with their current employers if they wish to remain in the city.

Blaza said she believes that the proposed bill to ban migrants on tourist visas from searching for employment will further hinder non-residents from leaving abusive jobs.

“If that law was already passed when I was contemplating leaving my former employer, I would not even think of leaving despite our arguments as it would cost more to change jobs. I’d rather stay,” said Blaza.

“With such a measure, we’ll just wait for our contracts to end, just so we won’t experience the six- month ban,” she added.

For non-residents residing in the region for fewer than six months, only a two-day visa is issued once they decide to leave their jobs without finishing their contracts.

Jassy Santos, president of the Progressive Labor Union of Domestic Workers (PLU), advises the group’s members to only surrender their blue cards to immigration once they ‘make a U-turn’ to Zhuhai, meaning they would enter Zhuhai and come back on the same night.

Usually, such workers surrender their blue cards on the day when their contract ends, affording them just eight days to exit Macau.

However, many migrant workers cross the border into Zhuhai on the final night of their visa, where they are then granted a 30-day tourist visa upon their re-entry to Macau. They surrender their blue cards the following day, and use the extended tourist visa to search for new employment.

A domestic worker who ended her contract last month carried out the ‘Zhuhai U-turn’ procedure.

According to the employee, who asked to remain anonymous, she opted to leave her employer to work for a cleaning company instead.

However, due to the MOP25,000 referral fee being asked from her, she decided to use her remaining one-month visa to seek a different employer.

For some domestic workers in the territory, MOP25,000 is equivalent to nearly half a year’s worth in salary.

“I was waiting for this cleaning company to hire me, but the fees were extremely high. I was told by people I know that I had to pay referral fees twice, so the amount would go from MOP15,000 to MOP19,000.”

“However, I was also told that if I paid MOP25,000, there was an assurance I would get the job immediately without going through difficult processes,” she added.

Questioned by the Times as to whether she would have still considered leaving her former employee if the proposed bill was in effect, the non-resident worker said, “I don’t think so. Going back home and going through a series of processes and agency fees would take so much time and money.”

“I really hope the bill won’t be pushed through, because it would be difficult for many migrant workers,” said Santos. “We have discussed the eight-day visa with DSAL already but they said it’s not under their control, so we cannot do anything about that.”

The PLU, along with other migrant associations in Macau, met with DSAL in February to review labor practices including the extension of the eight-day visa.

For now, migrant associations are awaiting the details of the bill, which is scheduled to be discussed tomorrow at the Legislative Assembly.