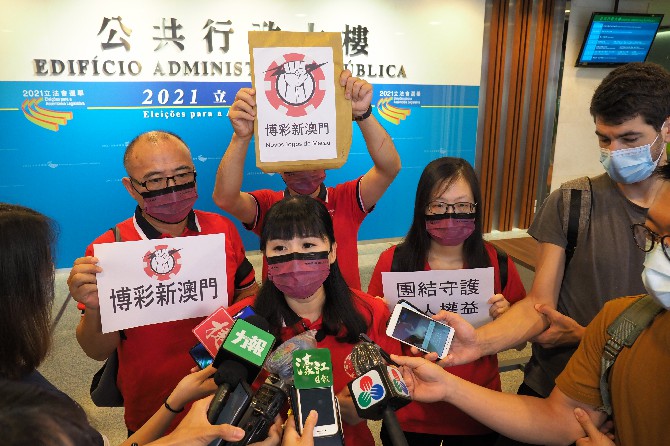 Yesterday, Cloee Chao, an advocate for worker rights in the gambling industry, submitted her list of candidates for this year’s Legislative Assembly election.
Her team will run under the list named Gambling New Macau.
The list includes eight candidates, with Chao first, years-long comrade Lei Man Chao second, followed by Leong U Kan, Chao U, Ao In, Kuok Kit I, Wu Hang Kun and Chao Kim Kuong. All are either current or retired gambling industry workers.
Speaking with the press, Chao, who is no stranger to contesting the parliamentary election, admitted that she has felt greater pressure this year.
In the 2017 election, she debuted as the first candidate on the list called Top Frontier of Gambling Industry Workers, receiving slightly more than 3,100 votes. However, this did not win her a seat in the parliament.
In spite of the pressure, the worker rights advocate pledged that the team would try its best to get a seat.
Chao said that the absence of casino bosses in this election would not benefit her team, because “the votes for bosses and workers are from voters with different stances.” As a result, her team will remain firm in its desire to safeguard worker rights.
This year, no casino bosses are running in the direct election constituency, although it is rumored that SJM boss Angela Leong will be running in the indirect election constituency.
Chao admitted that the team has felt pressure to withdraw from the election, but they resisted it as they consider electoral freedom and fairness key to society.
Previously, another list connected to the gambling industry withdrew during the nomination phase of the election. Its representative refrained from comment on the subject. AL