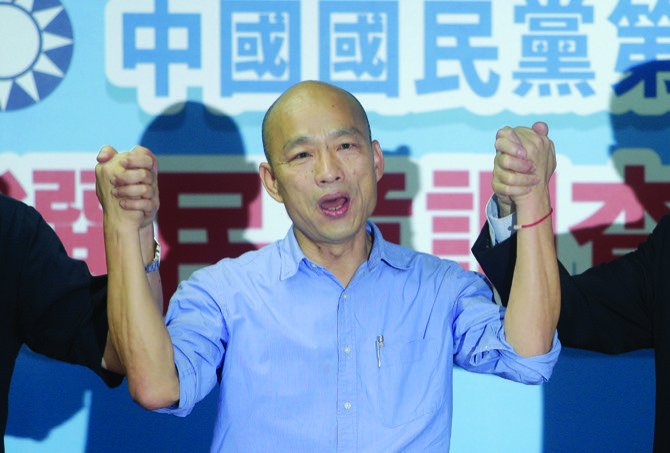 Han Kuo-yu – the firebrand Kaohsiung mayor who advocates closer ties with China – overcame Gou and three other candidates in the Kuomintang’s presidential primary yesterday. Han got a weighted average support of 44.8% in a public poll conducted July 8-14, while Gou got 27.7%. Former New Taipei City Mayor Eric Chu came in third with 17.9%.

Han went directly after Tsai, who hails from the pro-independence Democratic Progressive Party, after the result, saying “all Taiwanese have been leading a very tough life for more than three years under the reign of Tsai Ing-wen.” “We are most worried that the young generation of Taiwanese cannot see a clear future,” Han told reporters at KMT headquarters in Taipei.

Gou, who had been discussed as a possible third-party candidate if he lost the KMT nomination, congratulated Han in statement yesterday without giving any indication of his political plans.

Han’s victory over Gou’s financial muscle sets him up as the main challenger to Tsai in a race shaping up to be one of the most hotly contested since Taiwan was first able to elect presidents in 1996. His support for repairing ties with China presents a stark contrast with Tsai’s vocal criticism of Beijing, and could raise to a fever pitch the debate about Taiwan’s fragile relations with the mainland and the U.S.

“The Han wave is real, but it remains to be seen whether it has peaked already,” said Shelley Rigger, a political science professor at Davidson College and author of “Why Taiwan Matters: Small Island, Global Powerhouse.” “The big question for voters is likely to be, can he pull off an improvement in cross-strait relations without giving away too much?”

Shares of Hon Hai Precision Industry Co., the flagship unit of Gou’s Foxconn Technology Group, pared earlier losses to rise about 1% to NT$78.10 by close of trading yesterday in Taipei.

Han’s win is the latest step in his meteoric rise over the past year, from political obscurity to a step from the presidency. The 62-year-old was head of a government controlled agricultural produce distributor in Taipei when the KMT asked him to run for Kaohsiung mayor – after it had already been rebuffed by several of its preferred candidates.

His everyman persona, populist message of prioritizing economic growth and closer ties with China, and legions of dedicated “Han fans” propelled his mayoral victory in a city normally considered a DPP stronghold. Han’s nomination still needs approval by the KMT’s central standing committee Wednesday, and its national congress on July 28.

The results leave uncertainty about Gou’s future after he relinquished his position as chairman of Foxconn, the main assembler of Apple Inc.’s iPhone, to focus on the presidential race. Gou has declined to categorically dismiss mounting speculation that he would consider running as an independent.

Gou said in a statement only that he would continue to devote himself to the Republic of China, the formal name of the government based in Taipei. “I always ask myself what I can do for this beloved land,” he said.

Another mayor – Taipei’s Ko Wen-je – is widely expected to announce his entry into the race as an independent in the coming weeks.

Earlier this year, Han described Taiwan and China as partners in an “arranged marriage” who had fallen “madly in love.” He’s also said that peace talks are “inevitable” between the democratically run island and Communist-ruled China. Using 1970s-style Chinese nationalist rhetoric, he’s portrayed the election as a battle for the soul of the Republic of China, the official name of Taiwan’s state.

Tsai, on the other hand, dismisses Beijing’s claims to sovereignty over Taiwan. She has strengthened the island’s informal alliance with America and sought to bolster its defense capabilities against a potential Chinese invasion with a series of military-hardware purchases.

Han has “made statements that have suggested he is more pro-Beijing than he has let on during the campaign, and his true views are likely to catch up to him as he tries to draw a contrast with Tsai on cross-Strait relations during the general election,” said Derek Grossman, a senior defense analyst at Rand Corp.

“If Han were to win, the U.S.-Taiwan defense relationship would be fine, so long as there is no evidence that his victory was the result of Chinese interference and that his decisions, once in office, are purely his own and not controlled or overly influenced by Beijing,” Grossman said. Miaojung Lin & Iain Marlow, Bloomberg