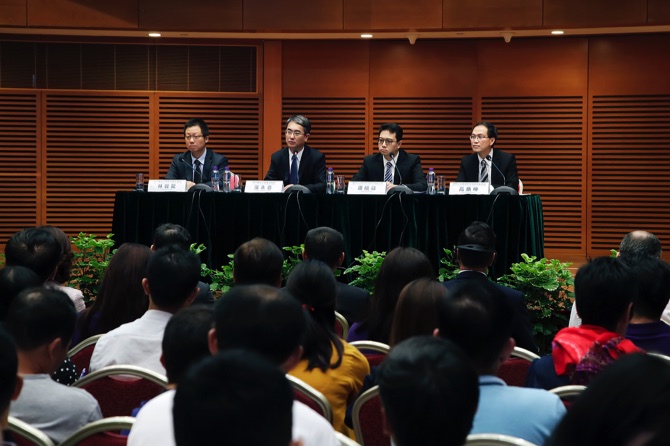 Candidates and political analysts are criticizing the Electoral Affairs Commission for the Legislative Assembly Election (CAEAL), for creating confusion between the definitions of “propaganda activities” and the rights of candidates to inform the public of their agenda – another controversy in addition to the short amount of time given to candidates to promote themselves.

On August 1, the commission issued its second election guideline in a bid to regulate campaign promotional activities. However several candidates and political analysts expressed their belief that it is absurd for the commission to issue such guidelines.

The guideline titled “2/CAEL/2017” requires the removal or deletion of any message or information – displayed in any public area and online platform – that aims to draw public attention to a particular candidate or candidates.

Any message or information aimed at encouraging voters – in an explicit or implicit way – to vote or not vote for a particular candidate or candidates are also prohibited.

Candidates are banned from performing any kind of act deemed as propaganda until September 2. Thus with the current silent period for candidates, some, especially newcomers, are finding it problematic to promote themselves for the AL elections.

Candidate and Assistant Dean of Faculty of Social Sciences at the University of Macau, Agnes Lam, lamented that the new guidelines are “absurd and ridiculous,” adding that the new candidates are “basically forbidden to do anything.”

Current lawmakers, some of which are running in the upcoming election, are still permitted to voice their views at the Legislative Assembly. However, newcomers are required to keep silent.

“We only have two weeks to do the campaigning but then, all of the existing legislators can talk about what they can do and they can report to the voters what they have done and accomplished,” Lam told the Times.

“We’re not allowed to talk about our platforms, […] something for voters to justify if these [candidates] are having same kind of ideology, and that’s very important,” Lam added.

As candidates are forbidden to tell voters to elect them, Lam argued that the word ‘imply’ is misleading, and that the way the committee interprets the law is problematic.

“This is very ridiculous. It doesn’t go right with the law. […] I don’t even know if this is really something from the law,” the candidate, who also ran in the 2009 and 2013 elections, said.

Although Lam agreed that using public spaces and public resources for conducting promotional activities for the silent period could be banned, Lam expressed the belief that restricting candidates from meeting people and posting their sentiments on social media platforms is irrational.

With the current regulations in place, Lam said that residents will not have enough time to understand what the newcomers are actually fighting for.

Lam stated that in her view, the CAEAL’s regulations had good intentions, aiming to prevent candidates from buying peoples’ votes and to end corruption.

However she went on to lament that the committee is enforcing regulations that suppress the campaign itself.

Political analyst Larry So also noted that from his perspective, it was unfair for newcomers to be banned from having the chance to communicate with voters.

As existing lawmakers could still conduct activities under the name of different organizations they belong to, this leaves newcomers in a less advantageous position.

So suggested that the region should allow its candidates to conduct promotional activities right from the time CAEAL published the definitive version of the list of accepted candidate teams to direct and indirect elections.

Meanwhile a local lawyer Sérgio de Almeida Correia argued that the problem of the current pre-campaign rules lies in the interpretation of the law.

The law expert recalled that the Law 3/2001, republished on February 13, 2017, according to the Executive Dispatch 21/2017, is applicable to the regulation of the election, by direct and indirect suffrage, of the members of the Macau SAR Legislative Assembly only.

Almeida Correia cited that the purpose of the Electoral Committee, according to article 10, paragraph 1. 2), is to secure the effective equality of “action” and “propaganda” of the candidates during the electoral campaign.

“We are not yet in the period of the electoral campaign,” the lawyer reminded.

“In my view, the interpretations that are currently being made is clearly abusive and prepotent because the Electoral Commission is making a confusion between “propaganda activities” and the right to inform the public and to be informed, and the freedom of expression,” Almeida Correia explained.

He reminded that the right to inform the public and the freedom of expression, and the right to issue an opinion about any subject is currently regulated by the Basic Law.

The pre-campaign guidelines also stated that promotional messages used during the official campaigning period must be removed or deleted on or before the midnight of September 15.

“The unfairness and absurdity of all process are in the interpretations of the law made by the Electoral Committee. To tell the candidates that they have to remove all information, as well as messages made before the campaign official period starts is an absurdity,” he criticized.

“To tell the candidates that they cannot inform the public about the result of the draw and of the position they occupy in the voting bulletins is another absurdity,” Almeida Correia added.

Previously, candidates including Lam have filed a complaint to the electoral committee regarding matters such as the short time for campaign activities.

According to the lawyer, the committee can issue binding instructions in order to execute the provisions of the law, but such instructions cannot overpass and be more restrictive of what it is stated in the law.

“Otherwise the committee will be misusing the powers given by the legislator, and this is a serious breach of the law in any “second system” region,” he explained.

The legal expert also slammed CAEAL for violating the International Convention on Civil and Political Rights, noting that the interpretation made by the committee is abusive and violates the Basic Law and the rights to inform, in addition to violating the freedom of expressions and of speech.

Meanwhile Tong Hio Fong, president of CAEAL explained that candidates are permitted to discuss “civic matters related to the community” but are restricted from mentioning their political agendas.

The lawyer criticized Fong’s statement, questioning, “What is a civic matter and issue of the community?”

“This is absurd because all political programs are about “civic matters” and if any candidate, and some are more well known than others, participate in a debate about such issues, how can they hide that they are candidates or that what they defend is included in their programs?” the lawyer asked.

“What he said is perfect non-sense,” Almeida Correia concluded.

New guidelines cause confusion among candidates

The new CAEAL guidelines have also resulted in confusion among candidates, with some reportedly suspending their social media accounts, or deleting posts that they feared may violate the rules. Sulu Sou, president of the New Macau Association has reportedly hidden some contents of his Facebook page. Following the advertising ban that took effect on August 3, the candidate was reportedly notified by CAEAL that information regarding his candidacy could still be seen. Thus he opted to hide his page contents to be in line with CAEAL guidelines, but hoped to quickly obtain clearer guidelines from the commission.