Emerging from lockdown: ‘46 days in the house was enough’ 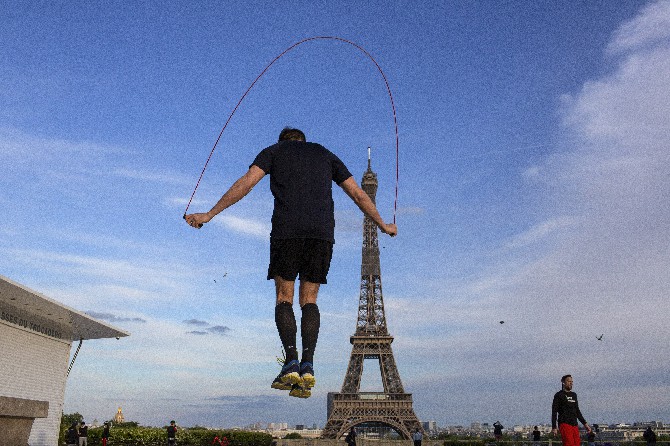 A man exercises along Trocadero Square in Paris, close to the Eiffel Tower

From the United States to Europe and Asia, people in many parts of the world are emerging from their homes as virus-related restrictions begin to ease and springtime temperatures climb.
But the global pandemic took a turn for the worse in other places. India on Sunday reported more than 2,600 new cases, its biggest single-day jump. That followed record increases in neighboring Pakistan and Russia the previous day. There was also worrying news from Afghanistan, where about a third tested positive in a random test.
China, which reported two new cases, is seeing a surge in visitors to tourist spots, many newly reopened, after domestic travel restrictions were relaxed ahead of a five-day holiday that runs through Tuesday.
Nearly 1.7 million people visited Beijing parks on the first two days of the holiday, and Shanghai’s main tourist spots welcomed more than a million visitors, according to Chinese media reports. Many spots limited the number of daily visitors to 30% of capacity or less, keeping crowds below average.
Masks were worn widely around the world, from runners in Spain to beach-goers in the southern United States. In New York City’s Central Park, joggers moved past each other without a glance on Saturday, and a steady stream of folks left tips for a trio working their way through a set of jazz standards alfresco.
“It’s great to have an audience after all these weeks,” saxophonist Julia Banholzer, a native of Germany, said. “All my dates have been canceled through September, and I don’t know if any will come back this year. New York is a tough place, but this is just another tough period we need to get through.”
Neighboring New Jersey reopened state parks, though several had to turn people away after reaching a 50% limit in their parking lots. Margie Roebuck and her husband were among the first on the sand at Island Beach State Park. “Forty-six days in the house was enough,” she said.
In Spain, many ventured out Saturday for the first time since a lockdown began on March 14.
“I feel good, but tired. You sure notice that it has been a month and I am not in shape,” Cristina Palomeque said in Barcelona. “Some people think it may be too early, as I do, but it is also important to do exercise for health reasons.”
Prime Minister Pedro Sánchez asked citizens to remain vigilant. Covid-19 has caused more than 25,100 deaths in Spain.
“Until we have a vaccine, we are going to see more outbreaks,” Sánchez said. “What we need to guarantee is that these outbreaks do not put our national health system in danger.”
The divide in the United States between those who want lockdowns to end and those who want to move cautiously extended to Congress.
The Republican-majority Senate will reopen Monday, while the Democrat-controlled House of Representatives stays shuttered. Senate Majority Leader Mitch McConnell’s decision to convene 100 senators gives President Donald Trump, a Republican, the imagery he wants of America getting back to work, despite health worries and a lack of testing.
In India, air force helicopters showered flower petals on hospitals in several cities Sunday to thank doctors, nurses and police who have been at the forefront of the battle against the pandemic. U.S. Navy and Air Force fighter jets flew over Atlanta, Baltimore and Washington, D.C., on Saturday in honor of health care workers.
The number of confirmed cases in India neared 40,000 as the country of 1.3 billion people marked the 40th day of a nationwide lockdown that has upended lives and millions of jobs. The official death toll reached 1,301.
Afghanistan’s health ministry said Sunday that 156 people were confirmed positive out of 500 randomly tested in Kabul, the capital. Ministry spokesman Wahid Mayar called the results concerning and said that more cases would surely be found if the government was able to conduct more tests.
Russia announced 9,633 new cases Saturday, and Pakistan, nearly 1,300, both one-day highs. More than half of Russia’s new cases were in Moscow, which is considering establishing temporary hospitals at sports complexes and shopping malls to deal with the influx of patients.
The virus has killed more than 240,000 people worldwide, including more than 66,000 in the United States and more than 24,000 each in Italy, Britain, France and Spain, according to a count kept by Johns Hopkins University. Health experts warn a second wave of infections could hit unless testing is expanded dramatically.
For most people, the coronavirus causes mild or moderate symptoms. For some, especially older adults and those with health problems, it can cause severe illness such as pneumonia, or death.
There are economic factors to consider as well. The shutdown of businesses has plunged the global economy into its deepest slump since the 1930s and wiped out millions of jobs.
Singapore announced Saturday it will let selected businesses reopen from May 12 in a cautious rollback of a two-month partial lockdown, and Sri Lanka said the government and private sector should resume work from May 11 “to ensure a return to normalcy in civilian life and to revive the economy.”
Bangladesh, which opened thousands of garment factories last month, confirmed 552 new cases on Saturday. The South Asian country’s health care system is fragile, and authorities say they would not be able to provide ventilation and intensive care support for more than 500 people at one time. KEN MORITSUGU & DAVID PORTER, AP