End of the beginning: England wants Euro win to lead to more 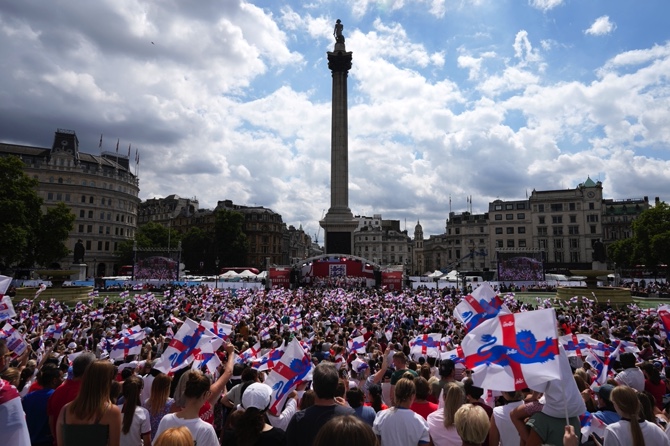 In soccer-mad England, which sees itself as the home of the world’s game, women and girls finally have a team full of heroes who look like them.

Some 7,000 singing, dancing, flag-waving fans — many of them mothers and daughters — jammed into central London’s Trafalgar Square yesterday [Macau time] to celebrate England’s victory in the 2022 women’s European championship, the first major soccer victory by any England team in 56 years.

The tournament, hosted by England and watched by record audiences on television and in stadiums across the country, was the culmination of years of investment in women’s soccer that organizers hope will spur more girls to play the game, which is known here as football.

Madison Fullerd-Jones is already on board.

The 9-year-old from Maidstone, southeast of London, got up early and came to the capital with her mother, aunt, two sisters and a cousin to celebrate with the Lionesses, as England’s soccer team is known. Wearing an England shirt and waving a flag bearing the national Cross of St. George, Madison said she hoped to play for England some day, just like her favorite player, Georgia Stanway.

“I just want to show how good I am and show that girls can do what boys can do,’’ she said. “I’m passionate about football.”

The legacy of the tournament will be “change of the best kind,” Williamson told the crowd.

“The legacy of the tournament was … what we’ve done for young girls and women who can look up and aspire to be us,” she said, still wearing the winner’s medal that was draped around her neck Sunday night by Prince William. “I think England have hosted an incredible tournament, and we’ve changed the game in this country, and hopefully across Europe, across the world.”

England beat Germany 2-1 Sunday night in an overtime game watched by 87,192 fans at Wembley Stadium, a record for any European championship final, men’s or women’s. The tournament as a whole attracted 574,875 spectators, more than double the previous record of 240,055 set in 2017 in the Netherlands.

Many more watched on TV, with the final achieving a peak audience of 17.5 million viewers and an average audience share of 66%, according to Ratings UK.

The figures underscore the resurrection of women’s football in England, where the men who ran the game once banned women from using their facilities for 50 years until the early 1970s.

After previous generations of women soccer players were forced to support themselves by working outside the sport, today’s players are able to focus on the game fulltime following the creation of a fully professional league in 2018-19.

Now supporters of the game are targeting increased participation at the grassroots level to spur continued success.

The Football Association, the sport’s governing body in England, is campaigning for schools in England to provide equal opportunities for boys and girls to play soccer as part of the curriculum. A recent study found that 72% of primary schools provided equal instruction to boys and girls, but that figure fell to 44% in secondary schools.

“This generation of ladies have had to fight and scrap and do everything,” Ian Wright, a former England player, said on the BBC. “Everybody’s in tears because this is the culmination of a lot of hard work, a lot of suffering, a lot of parents, a lot of people doing a lot work to get them here. […] It’s up to the FA to take over grassroots and get rid of all those barriers.” DANICA KIRKA, LONDON, MDT/AP