ENTERTAINMENT | Rocking the good old days with The Rod Experience 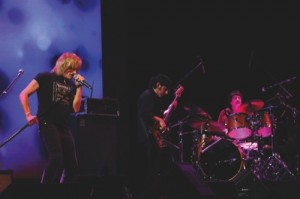 When it comes to rock music, some say that the genre already saw its prime between the 1970s and 1980s. However, the American rock band The Rod Experience has decided to bring back the best of rock to the present and allow audiences to get a taste of the good old days.
Currently serving up rocking nights to remember at The Venetian Macao’s Bellini Lounge until November 8, the Rod Experience is a one-
and-only historical tribute to Rod Stewart and his band.
Consisting of drummer Carmine Appice, bassist Kenny Aaronson, guitarists Danny Johnson and Jimmy Crespo, keyboardist Alan St. John and vocalist Rick St. James, the Rod Experience recreates the look, the clothes, the make-up, the moves, the sound and the energy of Rod Stewart’s performances.
In an exclusive interview yesterday, all six members of the band told the Times that this is their first visit to Macau. Rick St. James has described the experience as “interesting and different”. “The Chinese culture here, the Macau culture, etc., it’s quite different and quite unique. It’s been most hospitable. So we’re having a comfortable time being here,” he said.
His band-mate Carmine Appice also suggested that the feeling here is similar to that of Las Vegas, where people can stay in resorts and enjoy it for a long time.
In terms of their performance, Carmine Appice described it as “a historical show”, which started when he met Rick St. James at a convention and he mistook Rick for Rod Stewart. Later, they decided to start the Rod Experience as a tribute to the famous rockstar and also to themselves, because three of the six members were actually part of Rod Stewart’s band. “It’s a celebration of Rod and all his songs,” he said.
Moreover, Carmine Appice believes that people should expect an energetic performance “like they would have seen in 1979”. “It’s an old style band; it’s a time capsule going back to [what] the band was in 1976 through to 1981. It is experiencing that kind of concert as it was then,” Rick St. James said.
Furthermore, the group of six also shared their views on the contemporary music world. While they acknowledged that “the business has changed” and classic rock seems to be “dying”, they have in fact observed more and more young people playing classic rock.
They are also constantly approached by people in their 20s who know their music. The Internet, they think, allows young people to explore and experience the genre as well. And as Rick St. James says, “the classic never dies”.