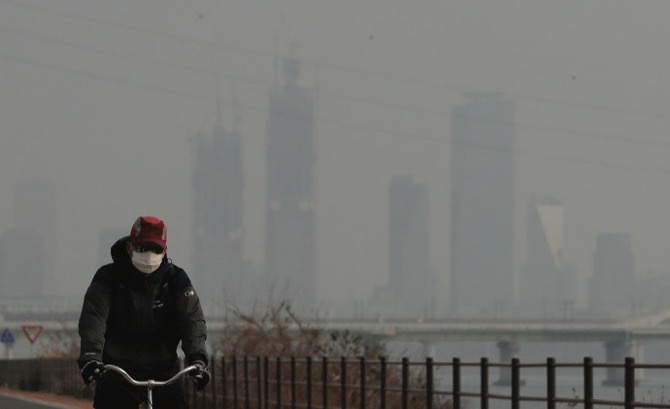 South Korean President Moon Jae-in has proposed a joint project with China to use artificial rain to clean the air in his country, where an acute increase in pollution has caused alarm.

Seoul has been struggling to tackle the rise in air pollution that experts have linked to China’s massive industrial activity and emissions from South Korean cars. Fine dust levels in South Korea have hit new highs over the past week, prompting people to wear masks while commuting under thick-gray skies that online users have compared to scenes from the movie “Wall-E.”

When asked about Moon’s proposal, Chinese foreign ministry spokesman Lu Kang said cooperation would be “good” but downplayed Seoul’s claim that China is a major source of its pollution problems.

“Is South Korea sure if their pollution is from China?” Lu said. “Many countries have realized that the causes of pollution are various.”

Na Kyung-won, the floor leader of the conservative Liberty Korea Party, called for Moon to designate the air pollution as a national disaster. Ruling and opposition parties held an emergency meeting at which they agreed to swiftly pass bills to cope with the problem.

In a meeting with government officials, Moon noted that China was “much more advanced” than South Korea in rain-making technologies and expressed hope that creating rain over waters between the countries would help mitigate the air pollution, Kim said.

In January, South Korea’s weather agency failed in an experiment to create artificial rain which involved an aircraft releasing chemicals into clouds over the sea.

“China has claimed that South Korea’s dust flies toward Shanghai, so creating artificial rain over the Yellow Sea would help the Chinese side too,” Kim quoted Moon as saying during the meeting. Moon also proposed that South Korea and China develop a joint system for issuing air pollution alerts, Kim said.

Moon instructed government officials to take steps to quickly close coal-burning power plants that have operated for more than 30 years and draw up an extra budget if necessary to install more air purifiers in schools and support possible joint activities with China, Kim said.