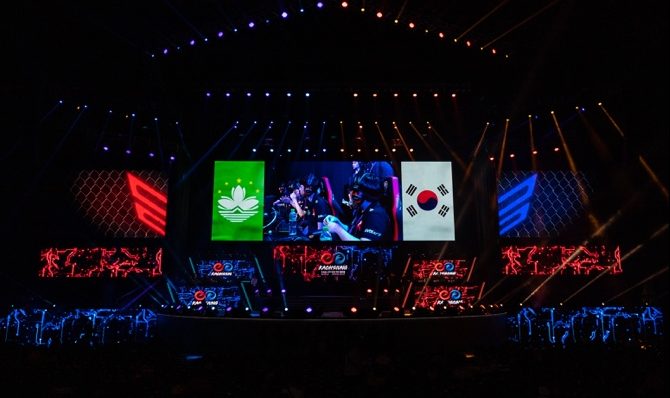 A Macau esports squad secured an unprecedented second place at a global esports championship on Monday, earning a silver medal and defying all expectations, according to the president of the local association that backed the team.

The silver medal was earned in the League of Legends category at the 10th edition of the IESF Esports World Championship held at the Kaohsiung Arena in Kaohsiung, Taiwan.

The Macau team was defeated 3-0 in the competition final by South Korea, widely considered the most successful nation in the esports world and known to field the most decorated players on the competitive scene.

In the matches leading up to the final, the Macau team triumphed over squads from Australia, Egypt, Italy, Sri Lanka and Israel, while not dropping a single game during the knockout stages. South Korea mirrored their unbeaten performance, defeating teams from Finland and Iran, as well as ‘home team’ Chinese Taipei in the semi-finals.

Local esports association Grow uP eSports, which organized and backed the Macau team, described the second-place feat as “punching far above Macau’s weight.”

“Our team this year was able to prove that, despite being a small region, Macau has the necessary talent to conquer the spotlight in the Esports World Championship,” said association president, Fernando Pereira. “We are very proud of the unprecedented achievement and we believe that this will inspire a healthy and competitive esports environment in the region.”

Organized by the Kaohsiung City Government, Chinese Taipei Esports Association and the Taiwan Esports League, the 2018 IESF Esports World Championship brought together some of the biggest names in esports, featuring players from the association’s 40-plus member countries.

Macau was eliminated early in the group stages of both other competitive categories, Counter-Strike: Global Offensive (CS:GO) and Tekken.

Grow uP eSports is a non-profit association which aims to promote the development of the esports sector in Macau. It is an expansion of its parent association in Portugal, which was founded over a decade ago and is now one of Europe’s largest and oldest such groups. DB