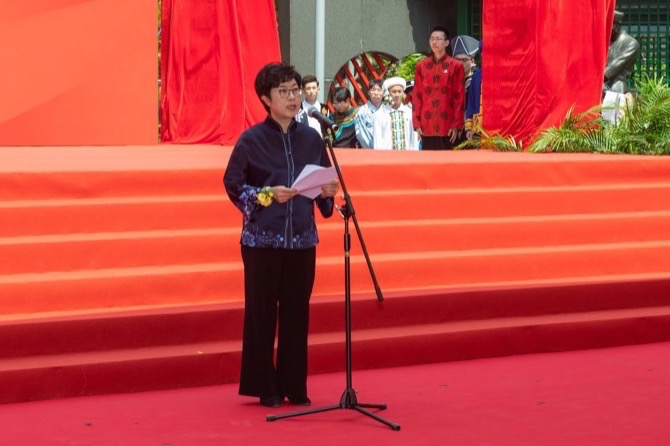 The Macau SAR government opened the Sculpture Park of the Chinese Ethnics on Saturday afternoon, featuring sculptures characterizing the 56 ethnicities living in the People’s Republic of China.

Although it is a permanent fixture, the Sculpture Park is among a series of celebratory events run by the SAR government for the 70th anniversary of the People’s Republic of China.

The sculptures were originally installed on Taipa Grande. The government has decided to move the sculptures to Ho Yin Garden in the Outer Harbor district to synergize with the patriotic atmosphere of the Handover Pavilion, which is also located in the garden; the Commemorative Gallery of the Macau Basic Law, located at Macau Forum; and Golden Lotus Square.

As the park’s managing body, the Municipal Affairs Bureau aims to build a base for education on the national constitution and the Basic Law, patriotism and the Chinese patriotic spirit.

An opening ceremony was held to mark the official opening of the park. It houses 50 sculptures, pictures, moving images and other relics. The exhibits are arranged in such a way to celebrate the spirit and characteristics of the Chinese ethnic groups.

The exhibits also symbolize a wish for peace and harmony between ethnic groups, and cordiality and unity.

At the ceremony, Secretary for Administration and Justice Sonia Chan emphasized the importance of Chinese ethnic unity.

The opening ceremony was held under the patronage of the Hong Kong, Macau and Taiwan offices of the State Ethnic Affairs Commission. It was co-organized by the Association for the Promotion of Chinese Ethnic Unity and co-curated by the Museum of Ethnic Cultures of Minzu University of China and the National Pictorial.

Additionally, as part of the 70th anniversary celebration, a session running today will allow youth from different Chinese ethnicities to take a tour across Macau and experience the city’s multifaceted culture and atmosphere. Other sessions will be held to review the tour and discuss international prospects.

On National Day, a performance featuring the same group of youth will be held to commemorate the prominent occasion. AL