THE EVENT | May protests: No longer silent 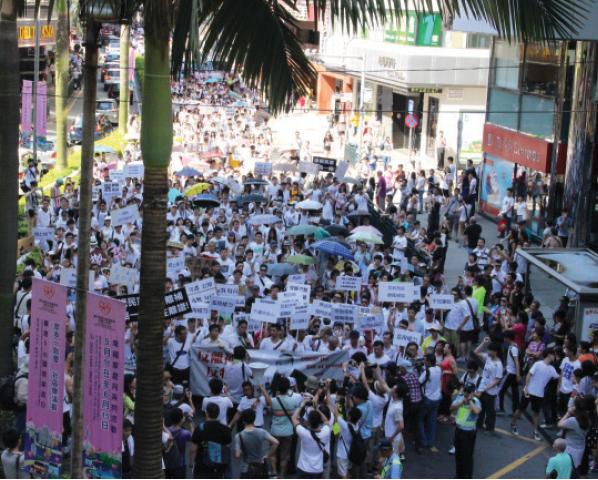 It was a sunny Sunday afternoon when many were surprised by a large demonstration against a bill that would increase benefits of the government’s top officials upon departure from their positions (the Chief Executive, for example, would get 70 per cent of his monthly salary until he found a new job) and would grant the CE with immunity from criminal charges during his tenure. There was no public consultation prior to the introduction of the bill, which would have retrospective effect.
In reaction to the proposal, an earnest crowd composed mainly of young people marched downtown on May 25 wearing white shirts emblazoned with “White-for-Withdrawal.” Protesters crossed their arms above their heads, shouting: “Withdraw!”
The demonstration was considered to be of historic proportions. It shook a government that had never been faced with a spontaneous protest on such a scale. The following day lawmakers (and Executive Council members) Cheang Chi Keong, Chan Meng Kam and Leonel Alves called a late night press conference, announcing that they had submitted a request to the AL president Ho Iat Seng. They wanted the bill to be sent to an AL committee for further examination.
But the crowd was not pleased with this and a new demonstration was organized on May 27, this time on the lawn facing the AL building.
Curiously, a small counter-demonstration in support of the compensation bill was organized by the Jiangmen Communal Society. Interviewed by journalists, the participants in that demonstration clearly didn’t know what they were standing for.
On the heels of two mass protests within one week, the Chief Executive Chui Sai On announced the scrapping of the contentious compensation bill on May 29. Chui called a press conference to make the announcement and said that the government would only advance with a new proposal “if the population agrees.”
After the May demonstrations Macau’s political landscape changed. Citizens voiced their opinions and refused to keep silent or accept the government’s position, forcing it to change plans and drop the compensation bill. It remains to be seen if they will again stand up in such large numbers to protest against issues that damage their quality of life, like pollution, heavy traffic and housing prices.